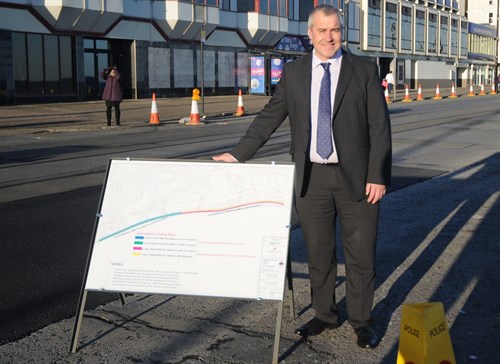 The Department of Infrastructure is progressing plans for the redevelopment of Douglas Promenade in line with the direction provided by Tynwald.

Tynwald Members have endorsed a set of design principles that support the full reconstruction of the highway and drainage system, the renewal of twin horse tram tacks in the centre of the road between Broadway and Summerhill and the regeneration of the area around the Gaiety Theatre.

At the January sitting, Members also voted for a single line extension to the tramway on the southern end of the Promenade between the War Memorial and the Sea Terminal.

The Department intends to return to Tynwald with a financial motion to secure capital funding for the full redevelopment scheme.

This will enable detailed design work to be progressed to reflect the wishes of Tynwald and to take into account constraints within planning, finance, construction, traffic management, property access, public safety and parking.

‘The message from the public and from Tynwald Members is to get on with the job and that’s exactly what we are doing. I made it clear that the Department would not be investing any further resources in this scheme without a steer from Tynwald. We now have that mandate and are working on the next steps in the process.

‘This is one of the Isle of Man’s biggest capital projects for many years and involves a huge amount of research, planning and design. While some of the work that has taken place over recent years will assist the Department, we need to draw up a very different scheme to anything that has been prepared before. For example, we must redesign the track alignment and assess the impact on kerb positions, parking arrangements, crossing points and junctions.’

‘Because of the many constraints, it will obviously take some time before we are in a position to get a spade in the ground. However, we now have Tynwald support, good momentum and the desire to deliver a professional job within the term of this administration.’

While financial and planning approvals are sought and detailed designs are drawn up, the Department will take the opportunity to resurface the southern section of Douglas Promenade as a temporary measure. A similar short-term fix was carried out at the northern end of the Promenade in November to improve the state of the road.

This work will be funded from the Department’s revenue budget at a cost of approximately £50,000 and is set to take place ahead of the new horse tram season starting in April. Further information about traffic management plans and parking restrictions will be available later this month.

The Department is also exploring options for the storage, stabling and welfare facilities required to operate the horse tramway and will make an announcement about its preferred approach in the near future.