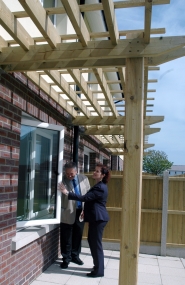 The final phase of the Janet’s Corner development in Castletown features the first homes in the Isle of Man designed to achieve the internationally recognised Passivhaus standard.

The pair of three-bedroom properties, which will be occupied by public sector tenants, have been built using methods aimed at minimising energy consumption. They are part of wider efforts by the Department of Infrastructure’s Housing Division to encourage more sustainable construction methods in the Island.

More than 30,000 buildings have been developed worldwide to meet the Passivhaus standard, which was first introduced in Germany in the 1990s. Although there are many examples of low-energy housing in the Isle of Man, the two properties located at the entrance to the Janet’s Corner estate are set to become the first to receive official Passivhaus certification.

Building to the Passivhaus standard helps to deliver a substantial reduction in energy consumption and an improvement in indoor air quality. This is achieved in part by high levels of thermal insulation, including triple-glazed windows, the use of whole house ventilation and heat recovery, and careful detailing and construction to maximise the airtightness of the building fabric. These ‘passive’ construction methods are used rather than more sophisticated technology such as solar panels, wind generators or ground source heat pumps.

‘The Government has undertaken a major modernisation of Janet’s Corner over the past eight years and I’m very impressed with the quality achieved in the two Passivhaus properties. I am passionate about protecting the environment and this latest development could point the way towards a more sustainable way of building affordable housing in the Isle of Man. The project has been a successful partnership between the Government and the private sector and I wish to congratulate all those involved, in particular the main contractor Tooms Brothers.’

Passivhaus was first introduced to the Housing Division in 2010 by local enthusiast Dave Watterson who had experienced the evolution of the concept during many years living in Sweden.

The development at Janet’s Corner has been supported by the Department of Infrastructure and Department of Environment, Food and Agriculture. The two eco-homes will assist officers in evaluating practical solutions to improve energy efficiency in new properties in the Isle of Man.

The houses have also provided an opportunity for construction students at the Isle of Man College, and others within the industry, to enhance their knowledge of this particular building method and to encourage the wider development of low-energy housing.

Phil Halliwell, an architect in the Housing Division Development Team and manager of the Janet’s Corner project, has delivered presentations and guided tours to MHKs, Government officers, fellow professionals and eco housing enthusiasts.

‘A significant amount of time and effort has been invested in this project with the aim of testing the benefits of building to the Passivhaus standard in the Island. The Department of Infrastructure will be monitoring energy use and environmental conditions in the properties during their first few years. Their performance will also be scrutinised by an independent Passivhaus certifier.’

‘It’s expected that the additional cost of building and maintaining a Passivhaus will be covered by savings on energy bills over the life of the property. We will also be looking at whether these homes are suited to the Isle of Man’s climatic conditions and meet the requirements of those seeking affordable housing.

‘Tenants have moved into one of the homes, and the other will be occupied later this month. The tenants have been briefed by the contractor on the differences between the Passivhaus and a more traditional construction and are enthusiastic about living in a low energy home.’