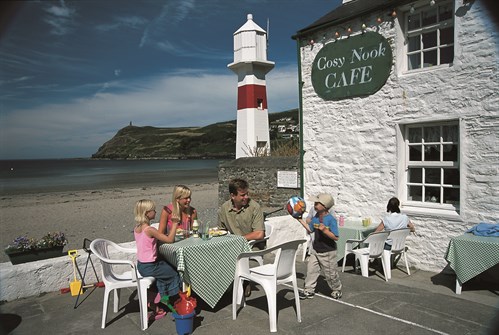 A former beachside café and a Victorian pub are among three Isle of Man buildings being considered for inclusion to a list of the Island’s registered buildings.

The Cosy Nook in Port Erin, Trafalgar House in Douglas and the Mitre in Kirk Michael were all issued with Proposal to Register Notices (PRN) on Monday, due to their potential special architectural or historical interest.

A three week consultation for each building will now be used to gather further information with a final decision made soon after.

If it is decided that one or more of the buildings meet the criteria they will be protected from demolition, and any alteration or extension that affects their character without first receiving registered building consent.

‘Our built environment plays an important role in our cultural and national identity, and the Department is proud to present these prominent buildings that we believe demonstrate the potential architectural or historical interest that is required for further consideration.

‘The Island’s registered building’s add character to the Island’s unique landscape and registration enables such buildings to be preserved for future generations.’

In December 2020, the Manx stone cottages known as the Cosy Nook, and Trafalgar House on Douglas quayside, were issued with Building Preservation Notices to temporarily protect them from total loss or damage.

It meant they were fast tracked for assessment, and initial investigations found they were worthy of further consideration.

Built in the mid-19th century, the Cosy Nook was run as a café before it closed in 2019, while Trafalgar House, which is currently on the market, was converted into a residential property in 2010. The Mitre is a working pub and parts of the building are believed to be have been built in the 16th century, making them around 500-years-old.

Currently around 250 buildings, ranging from thatched cottages to churches, are on the register.