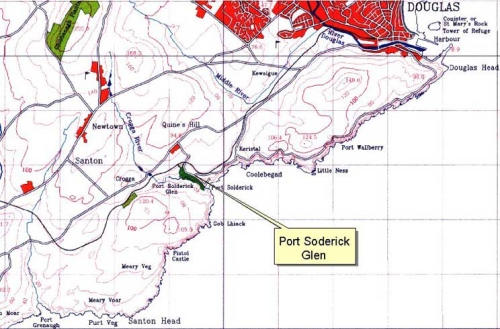 Port Soderick is situated 3 miles south of Douglas in rolling countryside close to the Old Castletown Road. Whilst not as rugged as some other glens, it is very sheltered and incorporates a flowering meadow at its centre.

Port Soderick became a Manx National Glen in 1975 and has been known in the past as the Sunny or South Creek. The glen itself comprises some 15 acres with the Crogga River running through it. It has several stands of conifers - particularly on its south side. During the springtime the northern banks are clad with bluebells, whilst a marshy area on the southern side is populated with Blughtyn or marsh marigolds. An additional 30 native species of Manx wildflower were introduced into the central meadow in 2006.

On site car parking is available, as well as wheelchair access along some of the glen’s pathways. For further information see the related link on this page.

As well as being accessible by car and bus, Port Soderick can be visited by taking the steam railway which opened in 1874. A pleasant and spectacular walk can also be taken from Douglas Head south to Port Soderick along the Marine Drive.