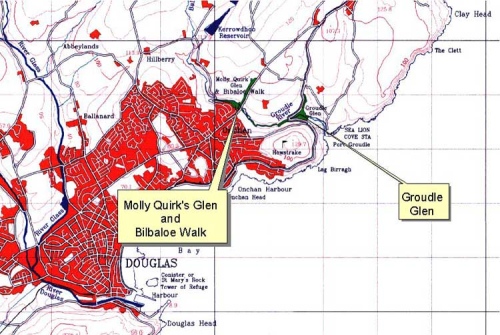 Groudle Glen lies 2 miles north of Douglas on the coast road to Laxey.

The glen was laid out by Richard Maltby Broadbent and opened in 1893, the same year as the adjoining Groudle Hotel. At first the glen was no more than a valley with very few trees, in fact it was advertised as The fern glen of the Isle of Man. It did however have one natural feature which appealed to the Victorians that being Lhen Coan (Lonely Valley) which was a small natural canyon.

Nowadays, the upper section of the glen contains excellent specimens of beech, whilst in the lower section pines and larch are more abundant. Within the glen is a small waterwheel and pumphouse which was originally used to pump water up to the Groudle Hotel.

Further down the glen, the miniature Groudle Glen Railway run by local enthusiasts operates on certain days throughout the year. The line curls around the headland to a small cove where the former operators of the glen kept Californian sea lions as an attraction.

Access to the glen is by car, electric tram or on foot from Onchan or Douglas.