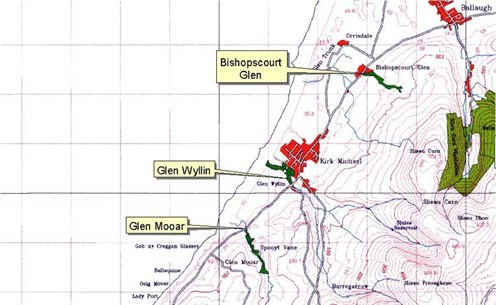 Just south of Kirk Michael on the coast road from Peel is Glen Wyllin. From a trickle in mid summer to a torrent when in full spate, the stream follows the course of the glen to the sea. This stream has in former times driven a water mill, hence the name, Wyllin being Manx Gaelic for Mill. The glen has a children's playground and a busy campsite, operated by the local commissioners, which is open during the summer months and which offers modern facilities.

The upper half has mature woodlands along its southern side and in the mid section of the glen 2 stone towers stand as sentinel reminders of the Manx Northern Line railway which they used to carry. Lower down past the waterfall, a grassy paddock is popular for picnicking.

There is easy access through the glen by way of the road which travels its full length and which leads to a car park by the sandy shore. Access is by car or bus and there is also easy wheelchair access.