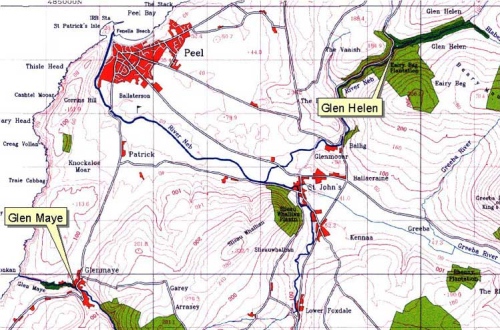 Glen Maye, or Glen Mea - The Luxuriant Glen - as it was once known, lies on the coast road south of Peel. The glen came into Manx national ownership in 1960. It comprises some 11 and a half acres situated on either side of the Rushen River, and contains as its main feature a magnificent waterfall. The glen's beautiful sheltered fern-filled woodland includes relics of the ancient forests that once covered the Isle of Man.

Apart from several fine Monterey pines (Pinus radiata) at the top of the glen, the majority of the trees are ash, sycamore and elm. The glen also supports plants which are not found anywhere else on the Island, such as Wood vetch (Vicia sylvatica), Hairy brome (Bromopsis ramsoa), and the 'Glen Maye bramble' (a micro-species variant of the common blackberry, Rubus fruticosus agg.). The beauty of the glen owes much to the spectacular abundance and diversity of attractive ferns such as hart's tongue, soft shield fern, polypody, lady fern, hard fern and broad buckler-fern, all of which abound in the mild, sheltered climate.

In the lower paddock stands the Mona-Erin wheelcase, the only real evidence left of the mining that took place in the area between 1740 and 1870. A further walk will take you down a path to the rough pebbled beach. The main feature of this walk is the towering cliffs on the northern side of the river. These are home for many species of seabird and hawks but in particular for the fulmars which nest there.

Glen Maye can be reached by the coastal footpath Raad ny Foillan (Road of the Gull) from Peel or Port Erin. Otherwise, access is by car or bus.