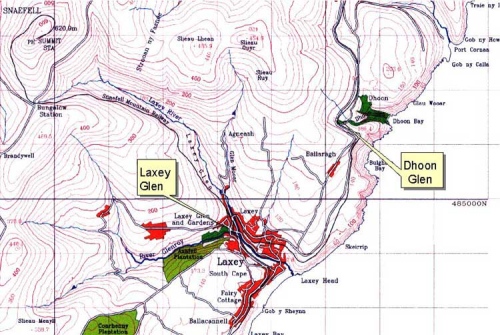 Situated 5 miles south of Ramsey, on the A2 Douglas to Ramsey coast road, lies Dhoon Glen. With its splendid waterfalls and natural beauty it has long been a favourite for amateur photographers.

Dhoon Glen is one of the steepest glens in the Isle of Man running for over half a mile through a wooded valley that follows the stream, to the shore. The main path follows an old cart road and meanders through a dense canopy of trees. Ash, wych elm and alder dominate with significant numbers of sycamore, birch and mountain ash also present.

The waterfall half way down the valley is known as the Inneen Vooar or Big Girl and is one of the highest on the Island falling over 40 metres (130ft) in 2 drops.

During the 1880s and 1890s the Manx Fairy, a small passenger ship, used to run daily between Douglas and Ramsey calling at Dhoon bay to unload passengers, who spent the day on the beach or in the glen, before being picked up for the return journey. The arrival of the Isle of Man Electric Railway in 1897 was another boost to visitor numbers.

The decline in visitor numbers post 1945 saw a gradual change in the character of the glen. It is now recognised for its rugged beauty and is popular with those energetic enough to tackle its 190 steps.

The Dhoon café at the head of the glen offers welcome refreshments. Access to the glen is by electric tram, bus or car.