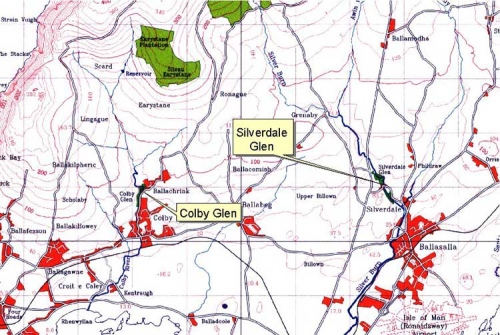 Colby Glen is in the village of Colby near to the main A7 road which runs through the village.

The 5 acre glen was acquired by the Manx Government in 1955 and assigned to the then Forestry, Mines and Lands Board for the purpose of creating a Manx national glen.

The Colby River runs centrally through the glen and footpaths on either side provide pleasant stream-side walks. Towards the northern end the valley widens out into a level grassed area which lends itself to recreation.

Colby owes much of its attractiveness to the mature broadleaved trees which populate the area. The main species are beech, elm, sycamore and ash. Not perhaps of such wild beauty as some other glens, it has its own charm, especially in the spring and early summer when wild bluebells and primroses are found in profusion.

The current management policy is one of minimal intervention resulting in little disruption to the natural flora and fauna, although paths and bridges are maintained to provide access. The path which exits from the northern end of the glen is a public footpath which leads to Cronk-e-Dooney.

Access to the glen is by car, bus or by alighting at the Colby Halt on the Isle of Man steam railway.