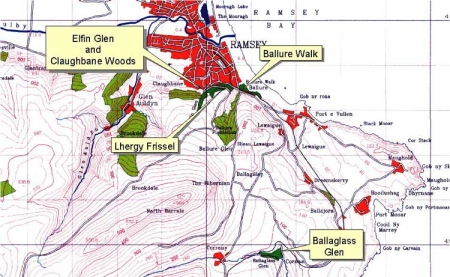 Ballaglass Glen in Maughold, south of Ramsey, was acquired by the then Forestry Board in 1952 and its 6.4 hectares (16 acres) have been managed as a semi-natural woodland since that time. The tree species mix consists of a central core of mature oak with magnificent mature beech on the eastern and southern edges of the glen. South of the river the woodland is mainly mature larch and pine with an area of natural regeneration of willow, birch and ash around the old mine buildings.

The Cornaa river, which has cut a deep channel through rocks of the Manx slate series, runs serpentine through the glen. The rock is grey flagstone formed from sand and mud deposited over 400 million years ago.

Ballaglass Glen once contained an important corn mill, last used in 1951. It was a typical Manx upland mill with threshing facilities and a drying kiln in addition to the grinding machinery. The house found south west of the glen probably belonged to the mill owner.

A second mill on the eastern edge of the glen is now derelict. This mill was probably used for threshing and breaking flax to separate the fibres from the waste in order to make linen. Flax was once grown as a crop in the Island for this purpose, but is now only found as a rare weed.

The stone buildings located within the glen were erected by the Great Mona Mining Company which operated from 1854 to 1857 and 1866 to 1867 to mine a mineral vein or lode running north and south crossing beneath the river bed from which lead, zinc and copper were extracted. The mine was short lived but typical of many in the days of speculative mining in the Isle of Man in the 19th century. The walls of the wheel casing, which housed the wheel, used to drain the mine workings, can be seen at the back of the main building.

The glen is very popular with artists and photographers. Access is by car, bus or electric tram.