River anglers on the Isle of Man have the opportunity to win an Other Waters fishing licence for the 2016 season.

Anglers are reminded to keep records and to submit their catch return form to the Department of Environment, Food and Agriculture by 31 January 2016 in order to be entered into a draw in which the winner will receive a free ‘Other Waters’ licence for the 2016 season.

The catch return form reports the date and location of fishing trips, whether any fish were caught, and details e.g. size and species of those that were.  Amalgamated information from catch returns is reported in the Department’s Salmonid Monitoring Report, available on the Government website, but individual personal data is treated confidentially.

'Anglers’ catch returns provide important information about the health of the fish stocks in the Island’s rivers.

'I hope that all river anglers will assist the Department in ensuring the sustainable management of this natural resource, by completing and returning the form at the end of the season.'

Angling for sea trout and salmon in the Island’s rivers enters its peak season during September.

Anglers who have purchased an ‘Other Waters’ licence can enjoy fishing for these beautiful migratory fish until the end of October, but should note that the season for brown trout closes on 30 September, and they must hold a full season licence in order to fish during October.

Anglers are encouraged to release all fish in order to conserve stocks but they may keep up to three fish of the legal minimum size per day, only one of which can be a salmon or sea trout. Fishing for eels is on a catch and release basis only.

The catch return form can be downloaded from the freshwater fishing page of the Isle of Man Government website www.gov.im/defa along with further information including angling regulations and licence prices – click on Fisheries Directorate and then Freshwater Fishing.

Alternatively forms can be requested by contacting the Department on +44 1624 685857 or by email fisheries@gov.im. 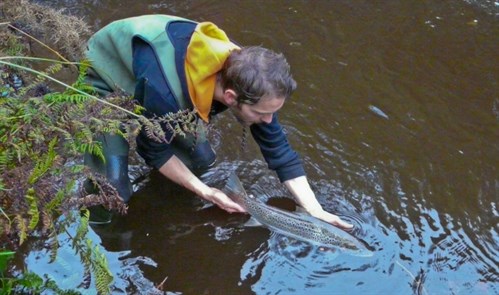