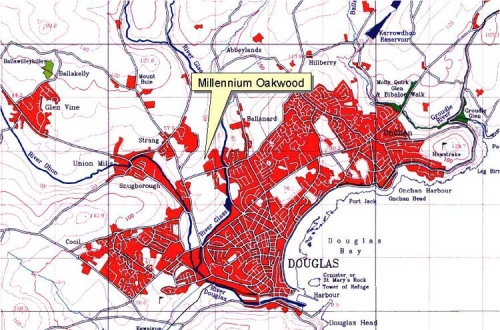 The Millennium Oakwood was conceived by the Mann 2000 Committee as a means of permanently commemorating this momentous point in time.

The site chosen extends to some 7 hectares and adjoins th

e hospital grounds to the south east. Currently access is via the Tromode Industrial Estate, off the Ballafletcher Road, Braddan.

The wood was created in a mass planting during a 2 hour period on 9 March 2000. There were 6868 trees planted by the Island's primary school children, one for each pupil, and practically all are thriving today. The ceremony was opened by representatives of the Mann 2000 Committee accompanied by the Lord Bishop and the popular BBC Television Blue Peter presenter Konnie Huq. Michelle Grogan, BBC Choir Girl of the Year sang The Oakwood Song, a piece which had been specially written for the occasion, along with all the children present.

A central sculpture based on a representation of the solar system, and incorporating a gigantic replica of the Manx Sword of State, is the main non-woodland feature present. There are, in addition, 3 wooden sculptures on different themes - the most notable being an acorn encased in an oak leaf which stands on a grassed area by the entrance car park.

The woodland is managed by the Forestry Amenity and Lands Directorate of the Department of Environment, Food and Agriculture.