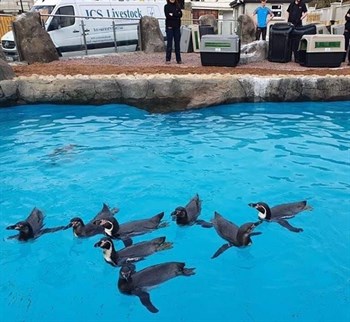 Fourteen rare penguins have been successfully moved from the Curraghs Wildlife Park in the Isle of Man to a new home in Northern Ireland.

The waddle of Humboldt penguins included 10 chicks hatched in 2020, and four that hatched the previous year, as part of an internationally recognised breeding program.

The move that has been months in the making comes after the Curraghs Wildlife Park enjoyed a record year for the South American species which is classed as vulnerable by the International Union for the Conservation of Nature (IUCN).

‘We are thrilled that they have arrived at their new home at the Exploris aquarium in Portaferry, and proud to do our bit to expand the captive population.

‘A move like this would be challenging at the best of times but the added obstacles of the ongoing pandemic and Brexit have made the planning particularly complex, but seeing pictures of them in their new pool made it all worthwhile. It has been a real team effort and I would like to thank everyone involved.’

The penguins have now moved into a brand new salt water pool and will continue to be part of the European Endangered Species breeding program.

Geoffrey Boot MHK, Minister for the Department of Environment, Food and Agriculture, who manage the Park, said:

‘I must congratulate everyone that has helped to make this possible in such difficult times.

‘Not only does our Wildlife Park protect species and contribute to breeding programs but through fundraising efforts it delivers direct help in the wild – where it is most needed.’

Last year the Curraghs team has raised more than £2,000 to help with projects in the wild where numbers are possibly as low as 12,000 and in decline.

Both the Curraghs Wildlife Park and Exploris aquarium are currently closed due to coronavirus restrictions.