The public are being asked to take extra care what they put down their drains after a pollution incident killed more than 140 fish.

The Isle of Man Government was alerted to the incident at Summerhill Glen in Douglas on Thursday by an officer from the Manx Wildlife Trust. Officers from the Environmental Protection Unit and Fisheries Division immediately investigated and water samples were taken for testing.

The water samples did not reveal anything of concern in the water, so the pollutant had most likely disappeared downstream by the time the incident was discovered.

In total, 143 dead fish were found in the stream, including brown trout and sticklebacks, and the fish population could take several years to recover.

‘Pollution entering the watercourse through surface water drains has badly affected the stream’s vibrant aquatic community. It is very important that people watch what they put down their drains as the consequences can be devastating and take years to recover from.’

The deaths will have a knock on effect on the other aquatic life that relied on them as a food source.

By tracing the stream back, officers could establish where the first signs of pollution occurred, in an area called ‘The Nook.’ They also found fish acting lethargically further down the glen which will hopefully recover. However, natural recovery of the fish population will be hampered by the steep weirs preventing upstream migration.

Fishery officers intend to check the stream next summer with a view to seeding the impacted stretch with fish from downstream.

If you have any concerns about what may be entering surface water drains or watercourses in your community, please contact the Environmental Protection Team on +44 1624 685885 or Fisheries on +44 1624 685857. 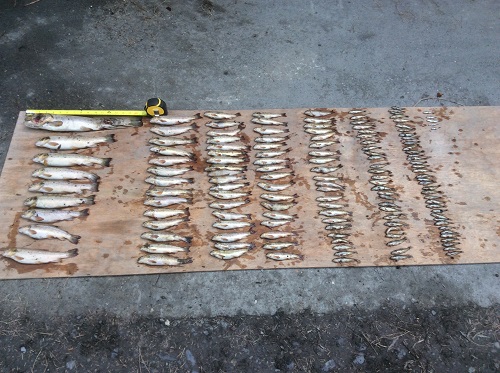