The Department of Environment, Food and Agriculture's Forestry, Amenity and Lands Directorate has been running a campaign to control the spread of Dutch elm disease since the current virulent strain first appeared on the Island at Milntown, Glen Auldyn in 1992. Even though Dutch elm disease has reached the Isle of Man, effective control has meant that less than 1% of the Island's elms have succumbed to the disease.

The Open Elm Project has been developed to bring Dutch elm disease into the public arena. The Department is looking for the public's help to identify potentially diseased elm around the Island.  Anyone with an interest in the Island's country side, urban trees and towns and villages is asked to contribute to the site.

The site includes information on recognising elm trees and identifying cases of possible disease. There are instructions as to how to upload information and to see a map of reported trees. Dutch elm disease is one of a relatively small group of vascular wilt diseases which affect elms by blocking the xylem vessels and preventing the transport of water and nutrients to the leaves. The leaves wilt and eventually the tree dies.

The aggressive strain of this disease was first recorded in Britain in 1927. A second major epidemic, starting in 1968, has decimated elms across the whole of Europe including the British Isles and now threatens the elm population in the Isle of Man.

Dutch elm disease can be transmitted from tree to tree by the elm bark beetle, root grafts and infected pruning tools. 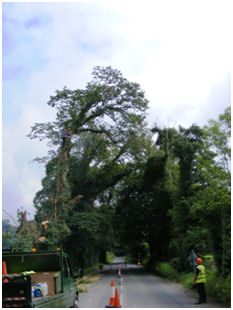 Prevention and control of the disease on the Island is achieved by:

Once identified, diseased elms are felled, their stumps peeled of bark and all wood burned. Since 1992 the Forestry, Amenity and Lands Directorate has overseen the destruction of approximately 1,700 trees from an estimated total population of 250,000 elms. The directorate relies increasingly on the general public reporting suspect trees and on tree owners taking a responsible attitude towards the storage and movement of elm timber. Storing elm as firewood risks spreading the disease as log piles are an ideal breeding ground for the beetle.

Transporting elm without permission from the Department is illegal and various safeguards are put in place when approving movement, such as ensuring loads are secure and covered.  See downloadable document for a leaflet on ‘Restricting the Movement of Elm’.