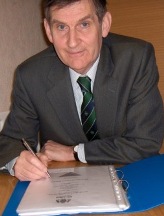 The commissioner is required to produce a report to the Department as soon as practicable after the end of each year and recent reports can be found in the Downloadable Documents section of this page. The Department is then required to lay the report before Tynwald, including a statement detailing if any matters have been excluded from the report because it would be prejudicial to national security or to the prevention or detection of crime.

The commissioner is responsible for keeping under review the exercise and performance of persons who have powers or duties conferred upon them by the Regulation of Surveillance Etc Act 2006. It is not the responsibility of the commissioner to keep under review the department’s actions in relation to amending or revoking any public document under the Act or any of the actions or powers of the Deemster or the Tribunal under the Act.

Steven Coren, a lawyer specialising in public law, was appointed Deputy Surveillance Commissioner in 2009 and in July 2015, he was subsequently reappointed and his current term of office expires in December 2022.

Educated at Cambridge University, where he took the Constitutional Law Prize, Mr Coren has been called to the Bar of England and Wales, and to the Manx Bar. A civil litigator at Old Court Chambers, he also advises on Manx public, administrative and employment law, also appearing at tribunals and inquiries.

Directed surveillance is surveillance which is not intrusive, so it does not take place in a person’s home or vehicle, but it is designed so the person under the surveillance is unaware of it and it is undertaken in relation to a specific investigation or a specific operation which is likely to result in the obtaining of private information about a person.

The commissioner may put in place arrangements under which the agencies must submit notifications.

The commissioner must scrutinise any authorisation given as soon as practicable after it is received. In this regard it is the duty of the Chief Constable and Collector of Customs and Excise to provide any documents requested in order to enable the commissioner to carry out his/her functions.

The commissioner may quash, cancel or order the destruction of records, but must report to the Chief Constable or collector as soon as possible after making any such decisions.

The commissioner has no involvement in approving or overseeing the authorisation of covert human intelligence sources.

Intrusive surveillance is only permitted to be carried out by the Isle of Man Constabulary and Customs and Excise.

Intrusive surveillance does not include providing information about the location of the vehicle, for instance through a tracker device or where communications are intercepted with the intended person's consent.

The commissioner may not order the destruction of records if they are the subject of criminal or civil proceedings. All records must be destroyed within two years of the authorisation and must not be provided to other jurisdictions unless they agree to comply with the two year requirement.

It is the duty of the Chief Constable and every member of the Constabulary, the Collector of Customs and Excise and every Customs officer to provide information requested by the commissioner within two days of the receipt of the request. The commissioner may investigate the circumstances of any case in which there has been, or where the commissioner suspects there may have been, a failure on the part of any person to comply with the codes of practice.

On completion of the investigation, the Surveillance Commissioner must submit a report of his/her findings to the Chief Constable, collector or prescribed officer in the agency concerned.