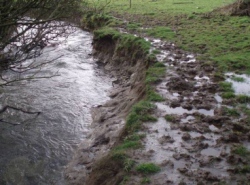 Erosion is a natural process but heavy grazing and/or trampling can accelerate it, as well as preventing the development of a diverse riparian zone. If damage to banks is extensive, the extra input of silt can smother spawning gravels, and, in time, lead to the stream becoming overly wide and shallow. However, once fenced off, stabilisation of banks and regeneration of the riparian zone often occurs rapidly without further management.

Sometimes it is necessary to repair banks or prevent a stream from migrating off a particular course. On designated 'main rivers', such work is the responsibility of the Department of Infrastructure (DOI) Flood Management Division (FMD), whose engineers are increasingly employing 'soft' engineering techniques, which preserve and/or enhance ecological potential. On other watercourses, consent must still be sought from the DOI before starting any work that may affect them. Doing so not only avoids breaking legislation but also gives Government staff the opportunity to give advice which may make the job more cost-effective as well as wildlife-friendly.

By shading out native vegetation they can reduce wildlife diversity and increase bank erosion. If you have any of these plants on your land, please seek advice from the contact below as incorrect treatment can make the problem worse.

Department of Environment, Food and Agriculture

Giant hogweed has a poisonous sap and should definitely not be strimmed!

Follow the link to the Control of Plants Advisory Service for factsheets on controlling these plants. 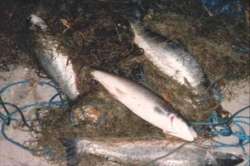 Poaching can devastate migratory fish stocks. If you suspect anyone of poaching, do not approach them but call the Fisheries Directorate immediately. Also, do not purchase Manx salmon or sea trout, even from licensed anglers, as it is now an offence under the Inland Fisheries Regulations 2011 to sell, offer or expose for sale any fish to which a licence issued under these regulations applies.

Department of Environment Food and Agriculture

Even short-lived pollution can devastate fish stockPollutions. Please dispose of waste in the proper manner, ensure correct plumbing of washing machines and dishwashers, and, if you are a landowner, follow the Code of Good Agricultural Practice for the Protection of Water. If you see a suspected pollution incident please report it on +44 1624 685885. 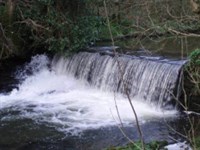 Obstacles such as weirs and culverts can sometimes prevent fish passage, affecting the ability of salmon and sea trout to reach spawning grounds. They can also limit resident brown trout populations by preventing dispersal between areas. On designated 'main rivers' DOI engineers liaise with DEFA Inland Fisheries staff to identify and resolve such issues where possible.

For a stream to support a healthy salmonid population, a range of physical features must be available. Where rivers have previously been straightened and/or dredged, the diversity of physical habitat and therefore the fish carrying capacity may be reduced.

If you own a stream, and wish to know if its wildlife potential could be enhanced, call: 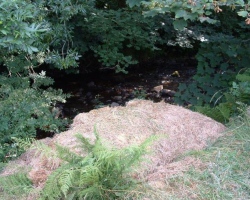 Overhanging vegetation provides valuable cover for fish. However, extensive stretches of heavy shade can reduce salmonid populations by preventing the growth of algae on which many of their invertebrate prey feed. The lack of an understorey layer of plants in such areas may also reduce bank stability.

Leachate from compost heaps and large piles of grass cuttings can affect water quality, as well as exacerbating bank erosion by preventing plant growth. Try to site them at least 10m from the banks of streams and ditches, especially where land slopes steeply towards the watercourse.