Rivers and streams provide food and habitat for a wide variety of native species, while riparian trees and shrubs also provide important habitat corridors for many animals not specifically associated with watercourses. 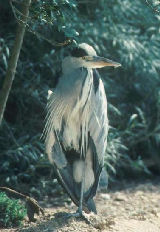 One of the Island’s most spectacular birds, grey herons can often be found hunting for fish, including eels, from the banks and shallows of streams.

As their distribution map shows, grey wagtails are largely confined to the Island’s stream network, nesting in and near riverbanks. They can often be seen hopping between stream boulders in their search for insects.

Daubenton’s bats are one of 7 species of bat native to the Isle of Man, and can be seen in the summer hunting for insects on or near the surface of the stiller reaches of streams. They will often use old stone bridges as roosting sites.

Many terrestrial insects actually spend the early part of their lives as aquatic nymphs such as these mayfly larvae.  Species vary in their tolerance of environmental factors, including different pollutants so, as well as being an important food source for trout and salmon, they can be used to assess the general health of a stream

Eels are fascinating fish, which spend most of their lives (up to 20 years) in freshwater before returning to the Sargasso Sea to spawn. They can be found in most types of watercourse but are often only encountered when found migrating across damp fields at night time.

Generally throughout Britain and Europe, eel numbers are declining. However, research conducted since 2007 indicates that the Isle of Man has a relatively healthy population, probably due to the lack of commercial exploitation.

Lampreys are primitive, jawless fish, which are very sensitive to pollution. All 3 British species have similar freshwater habitat requirements. Spawning takes place in gravel areas similar to those used by brown trout, after which the adults die. After hatching, the larvae, known as ammocoetes, spend several years burrowing in sandy silt and feeding on micro-organisms. Once adult, brook lampreys simply swim up to spawning grounds without feeding. However, sea and river lampreys migrate to saltwater to spend 1 or 2 years parasitising other fish by latching on to them with their sucker-type mouths.

Once feared to have disappeared from Manx watercourses, since 2007 brook lamprey (Lampetra planeri) have been positively identified in the Rivers Dhoo, Sulby and Neb and river lamprey (L. fluviatilis) have also been found in the latter. Further unidentifiableLampetraspecimens have been observed in the River Glass and Lhen Trench. Sea lampreys (Petromyzon marinus) have yet to be encountered in Manx watercourses although they have been seen on fish, including basking sharks, off the Island's coast.

Brown trout, sea trout and Atlantic salmon are all native to Manx streams. In order to support a healthy salmonid population, streams need to be of good water quality, free from obstructions to passage, and contain a variety of physical habitat to provide for the needs of all age groups.

The blackcap is a woodland bird, which is not specifically associated with watercourses. However, its distribution map illustrates how, on the Isle of Man, where woodland is relatively scarce, riparian trees and shrubs provide important wildlife corridors.