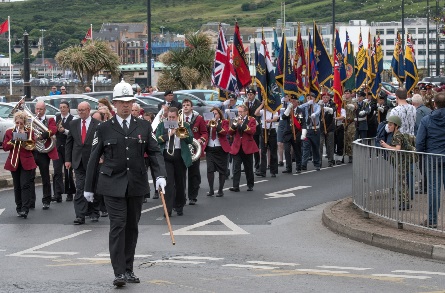 The public are being invited to turn out and show their support for the armed forces – past, present and future – this Sunday 24 June, as part of events to mark Armed Forces Day 2018.

Final preparations are under way for the event which will begin with a parade along Douglas promenades, starting at Regent Street at 3pm.

Veterans, serving members of the armed forces, cadets, other uniformed organisations and representatives from the Island’s secondary schools will parade to the Douglas war memorial, with His Excellency the Lieutenant Governor Sir Richard Gozney taking the salute at the Villa Marina colonnade.

The public are encouraged to line the route to show their support and are welcome to join in the festivities which will include a religious service in the Royal Hall at 3.45pm and, for the first time, entertainment in the Villa Marina Gardens for young people and families including a bouncy castle, slides and an inflatable activity centre.

This year the religious service will be followed by other commemorations in support of the armed forces. There will be music, readings, and poetry led by pupils from Ramsey Grammar School and a video showing the Island’s role in war. This year particular emphasis will be placed on the 100th anniversary of the end of the First World War and the 100th anniversary of the founding of the Royal Air Force.

'Armed Forces Day is an important way for the public to show its support and gratitude for the work, dedication and sacrifice of our armed forces and their families.

'The past is ever present – and with 2018 marking the centenary of the end of the First World War, the day will be a particularly poignant one. But it is not simply about remembering the fallen, it is about recognising and celebrating the work of our armed forces past, present and future.

'I do hope the public will join-in and show their support – the parade is an impressive sight. Armed Forces Day is an event for the whole community.'

The centenary of the end of World War I and sacrifices from later conflicts will be marked by the very moving ‘There But Not There’ commemoration. The tribute has been described by General the Lord Dannatt as the abiding concluding image to the nation’s World War I commemoration in the same way the poppies at the Tower of London captured its start in 2014.