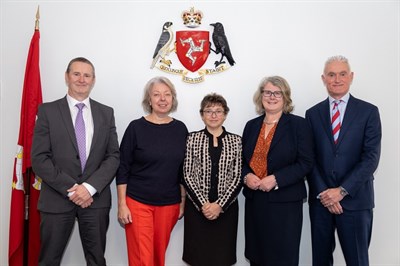 The first meeting of the newly appointed Electoral Commission took place this week. The five Commission members bring to the panel a wealth of experience from a variety of backgrounds, which include law, international business and compliance, as well as former local and national government roles.

The Commission is made up of five members: Peter Whiteway, Karen Ramsay, Michelle Norman, Sally Bolton, and Nigel Davis.

The Commission will now begin work on reviewing of the number of constituencies and their boundaries before submitting a report for Tynwald.

Tynwald have also tasked the Electoral Commission to review seven additional matters, which are:

As part of their review the Commission may seek feedback from key stakeholders, such as previous election candidates, current Members of Tynwald, Returning Officers and other interested parties as the Commission may see fit.  The Commonwealth Parliamentary Association (CPA) Benchmarks for Democratic Legislatures, and the CPA’s independent observation of the 2021 General Election and their subsequent report have also been made available to the Electoral Commission.

If anyone wishes to contact the Electoral Commission to share their own experiences in relation to the House of Keys election process there is a dedicated email inbox: electoralcommission@gov.im