Home Affairs Minister Juan Watterson MHK has today (Tuesday 9 August 2016) performed the sod cutting ceremony at the site in Ronaldsway that will be developed as the Island’s first combined fire and ambulance station. 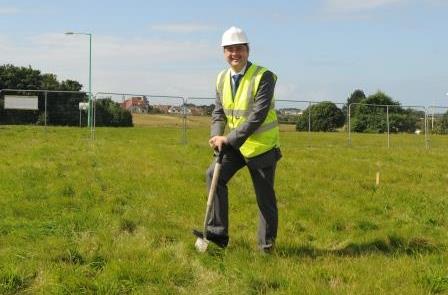 The new facility is being constructed opposite the Isle of Man Airport, near to the Sefton Express Hotel and Strix factory. The site was selected after a feasibility study and emergency services risk assessment of the Ballasalla and Castletown communities.

Scheduled for completion in summer 2017, the station will provide a drive-in drive-out capability for ambulances and fire engines, facilities for retained firefighters and ambulance staff, and a training ground incorporating a 10-metre tower.

Once the combined station is operational, the Southern Ambulance Service will vacate its current base at Four Roads, which will become a replacement for Port Erin fire station.

The £1.45 million investment in modern facilities, approved by Tynwald Members in June, is necessary as the existing fire stations at Farrants Way in Castletown and Droghadfayle Road in Port Erin are both more than 50 years old and do not meet current standards. The Department’s plans will allow the two Government-owned sites to be released for redevelopment.

‘This represents the beginning of a new era in collaborative working between front-line emergency services in the Isle of Man. The combined fire and ambulance station will meet operational demands, provide strategic emergency cover and better serve the community in line with the Department’s commitment to keeping people safe.’