What is Japanese knotweed?

Japanese knotweed, (scientific name Fallopia japonica), also known as donkey's rhubarb, was introduced to Britain from the Far East in 1825 as an ornamental plant.

It is the most invasive plant in Britain. It spreads rapidly, especially on waste ground and next to streams and rivers, forming uniform stands that shade out native plants thereby damaging wildlife habitats. It can also be seen in gardens and on derelict areas and can pose a problem to property developers due to structural damage to buildings caused by its roots and stems.

The main problem is that it spreads so easily through fragments of the roots (rhizomes) in contaminated topsoil or by stem cuttings in garden waste. Knotweed can grow in almost any habitat, and once established, it is very difficult to control. For this reason the Wildlife Act 1990 makes it an offence to plant Japanese knotweed 'or otherwise cause it to grow in the wild'. 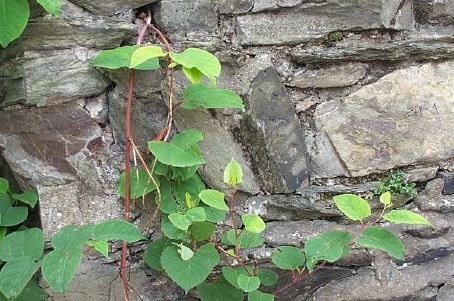 In spring, red shoots appear with rolled up reddish purple leaves. The plant grows rapidly, up to 10cm a day, and the leaves unfurl, becoming lime green and later darkening to mid green colour. The stems elongate and look similar to bamboo, as they are hollow with prominent nodes. However Knotweed stems tend to zigzag and possess reddish-purple speckles. Each leaf is carried on a short stem at a different level from the next leaf below or above. Sometimes the young leaf has a subtle stripe. In summer the mature plant reaches up to 3m in height. Clusters of creamy white flowers are produced in late summer/early autumn. No viable seeds have been found in the British Isles. 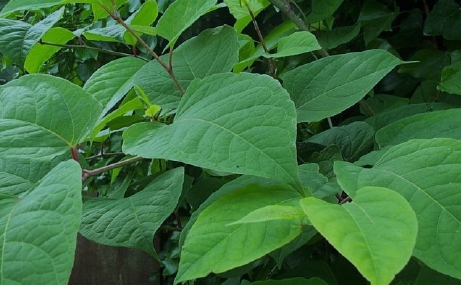 In winter the plant dies back leaving woody stems that turn dark brown. These can persist for 3 years and prevent the growth of native plants by covering the ground with dense litter.

Indentifying whether there is rhizome or crown fragments in the soil can be difficult. Look out for the carrot-like orange red core of the rhizome and the hard brown crown from which the shoots grow.

Note: Unlike giant hogweed (heracleum mantegazzianum), Japanese knotweed is not known to be harmful to humans.

How does Japanese knotweed spread?

Japanese knotweed has extensive, deep roots called rhizomes. These can be up to 3m (10 feet) deep and can extend out to 7m (23 feet) from the parent plant. Think of the plant as an iceberg, with a third of the plant above ground and two thirds under ground in the form of rhizomes, with an ability to spread.

Knotweed does not normally spread by seeds. However it can grow from cut stems, crowns or rhizomes:

The stem has a characteristic red speckled pattern.

Shoots appear from nodes on the stem.

The crown is at the base of the stem and is highly resistant to drying so it is capable of surviving composting and can regenerate into new plants.

This plant easily spreads to other areas if cut stems, shoots, crowns or roots (rhizomes) are distributed.