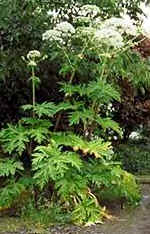 Giant hogweed can be recognised by its:

Flowers - Many small white flowers making up a large flowerhead, 50cm (18 inches) across.

Giant hogweed was introduced to the UK by the Victorians as a magnificent garden plant. However the plant has now escaped from its original sites and has spread rapidly, especially alongside rivers and burns.

Giant hogweed prefers growing beside water although it can also be found on roadsides, railway embankments, waste land and even gardens.

Giant hogweed produces a toxic sap which is released when the hairs on the stem and leaves are touched. When this sap gets onto skin and the skin is then exposed to sunlight, painful, watery blisters are formed. These can take a long time to heal and may need hospital treatment.

The skin may remain sensitive to light for several years after the initial contact.

Children must be warned to keep away from giant hogweed - not to use the stems as blowpipes or telescopes. Blisters around the mouth and eyes can be very painful and dangerous.

Once established giant hogweed can spread very rapidly and is difficult to control. Along river banks and roadsides, giant hogweed can take over and eliminate wildflowers and grasses. Favourite walks and play areas can be invaded and may become inaccessible.

Giant hogweed is a perennial. It will grow and produce leaves for 3 or 4 years before flowering. Once the plant has flowered it sheds around 5,000 seeds, spreading further afield before it dies.

Giant hogweed can be controlled but it requires time, effort and money. There is no single easy method of control but below are some of the options available.

Before starting to attack a single colony of plants on your own land some thought should be given to where the plants have come from, whether they might re-invade from nearby colonies, your responsibilities as a landowner and the risk that it poses to you or others.

Depending on the site and the number of plants, one of the following methods will be suitable for your site:

Remember, April and May are the best months to control giant hogweed - so start to plan early.

A useful and effective method if there are only a few plants to deal with.

Use a spade in the early spring and cut the plant below soil level while it is still small. (You may need to cut it again during the growing season).

Wear rubber gloves and boots and avoid contact with the plants.

If it is later in the year and you decide to cut down the plants remember that the root will still be active and will re-grow next year. Cutting down is only a temporary solution but it will remove the hazard for the time being.

Try to cut down the plant before the seed head develops. If this is not possible, collect all the seed heads in a bag and burn. Do not bury or put out in normal refuse collection - this will just spread the seeds to a new site.

Cutting the plant, and allowing some re-growth to occur then spraying the re-growth with herbicide will weaken the plant considerably. It may still require treatment the following year.

Try not to work near the plants in full sunlight - choose a dull day. The plant seems to produce more sap on sunny days increasing the danger of contamination of the skin.