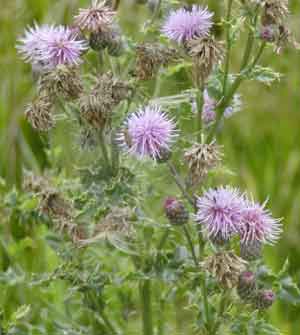 Mature plants extend 30-100cm in height, with flowers from July into late autumn each year. The plants produce only a few viable seeds which can be blown by wind. However invasion is more often by spread of the plants’ underground root systems.

Cultivation is not an effective means of control as the number of root pieces which can throw up new shoots is increased. Control on arable land therefore is usually by use of a range of herbicides depending on the field crop grown.

On grassland, cutting at flower stem extension but before opening of the flower buds will prevent seed spread for a particular season.

Repeated cutting at the same growth stage over several years may "wear down" an infestation.

MCPA herbicide applied during the early bud stage will kill the aerial parts of the plant, but repeat treatments the following year may be necessary for complete control. One application of the herbicide clopyralid* is normally sufficient to achieve an acceptable level of control.