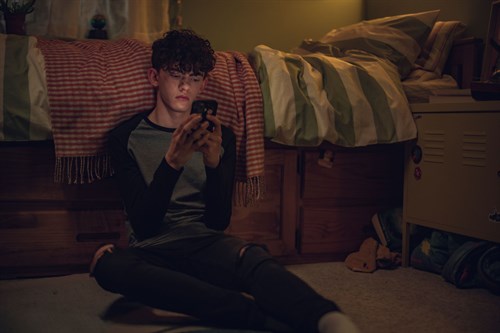 A school student, who beat 10,000 teenagers to land a starring role in the hit Netflix drama Heartstopper, has described it as a ‘dream come true’.

Joe Locke, who is about to sit his A-levels at Ballakermeen High School, has received rave reviews for his performance of Charlie Spring, in Alice Oseman's coming-of-ageseries.

It tells the story of teenage boys, Charlie (Joe Locke) and Nick (Kit Connor), who fall for each other as they are subjected to homophobic bullying by Nick's so-called friends.

Since airing on Netflix last week, the show has received five star reviews from critics and is regularly amongst the most watched shows on the streaming platform.

‘It’s always been my dream to be in a show and it’s been so exciting to see it go out and the amazing reviews and reaction.’

Joe landed the role after taking part in an open audition from his parents’ home using his mobile phone.

‘I always wanted to be an actor, but I never thought it would actually happen. So when I saw the open audition I went for it and managed to get it.

‘The Island has such a vibrant amateur dramatics scene and I learnt so many skills, and met so many talented and amazing people doing shows at the Gaiety [Theatre], and through my lessons.’

The young actor is now back home to complete his A-levels before exploring future projects.

‘Joe has always been a star and we are thrilled that his talent has been recognised in this ground-breaking drama.

‘Above all it highlights universal issues of friendship, love, belonging and standing up for others, even though there will be consequences. Joe’s portrayal of Charlie was utterly believable, endearing and authentic and we are very proud of him.’

During his time at Ballakeremeen, Joe has been a regular in their school plays and other shows organised by the Department of Education, Sport and Culture’s Kensington Arts.

The Arts centre in Douglas teaches young people drama for a minimal charge, and with help from the Isle of Man Arts Council, arranges for groups to perform as part of the National Theatre’s Connections programme in the UK.

Drama teacher, David Dawson, said: ‘Joe was always a strong actor, but it was his focus and work ethic, which stood out to me. He was always a joy to work with and knew where he wanted to go, which is a credit to him and his parents.’

In recent years, Joe has also performed in a number of local productions at the Gaiety Theatre, including Joseph and The Technicolour Dreamcoat and Singing in the Rain.