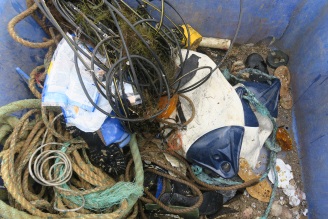 The first bags of marine litter have been landed by a local fisherman as part of the Isle of Man Government’s recently launched Fishing for Litter scheme.

The catch by the Manx fishing vessel ‘Frey’ included nine shoe soles, a circuit board and parts of a vacuum cleaner.

‘It’s a great idea which I’m happy to help with as it helps to clean up the sea which gives me my living.’

It is a simple idea designed to reduce the amount of marine litter in our seas. Under the initiative the Government provides fishermen with reusable marine litter sacks to collect rubbish that is caught in nets during their normal fishing activities.

‘A healthy marine environment is vital for everyone, especially the fishing industry as their livelihoods depend on it.

‘The Isle of Man Government is committed to reducing the amount of single use plastic on the Island and in its waters, and this project forms part of the Single Use Plastic Reduction Plan and the wider Climate Change plan.’

Fishermen can pick up a reusable sack from their local harbour office or the Manx Fish Producers’ Organisation in Peel and filled bags can then be disposed of in designated bins at the harbour side or collected by Isle of Man Seafood Products (IoMSP) on +44 1624 843739.

Isle of Man Seafood Products has shown great commitment to this initiative and is working in partnership to collect the bags from the fleet. Fisherman and IoMSP manager, William Caley said:

‘The best people to look after the environment and industry are the industry themselves.’

The marine litter brought ashore will be used to teach children about the issue so they can gain a better understanding of the vital work that fishermen are doing to protect the sea from litter.