The use of lasers, searchlights, fireworks and helium-filled toy balloons has the potential to impact upon aviation activity.

The release of sky lanterns and helium balloons has environmental impact and danger to wildlife; consequently their release is prohibited in the Isle of Man by the Sky Lanterns and Balloons (Prohibition) Act 2020.

Organisers should notify the Isle of Man Civil Aviation Administration of their proposed activity by completing CAA Form 3 giving 28 days’ advance notification of the following events:

Any firework or laser/searchlight display south of a line drawn east/west generally from Douglas Head through Mount Murray and Cringle Plantation as shown by the blue shaded area on the map below: 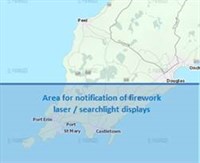 The Isle of Man Civil Aviation Administration will then look to deconflict or co-ordinate the activity, as well as promulgate warnings to the aviation community and establish any control measures considered necessary.

Any laser or searchlight site that is likely to remain in position for more than 30 days is considered a permanent site and may therefore be subject to planning consultation arrangements. Not every site will be significant to aviation, but the Isle of Man Civil Aviation Administration should be consulted during the initial planning process for any such installation.