All herds in the Isle of Man became tuberculosis accredited in 1957 as a result of a concerted testing programme. While sporadic cases occurred for some years afterwards (many the result of importations), the Island had no cases of bovine tuberculosis between 1971-2000 inclusive.

Despite the absence of disease, the then Board of Agriculture continued to test the Island’s cattle every four years and Local Government Board staff inspected all carcases at the Meat Plant. Concerns over the increase in tuberculosis in cattle in countries that supplied cattle to the Island resulted in the introduction of pre-import testing in 1999.

Unfortunately bovine tuberculosis was identified at a routine herd test in 2001; which resulted in a revision of testing protocols and further tightening of import procedures. Herd testing was increased to once every two years and has remained at this level since: all evidence indicates that testing every two years greatly reduces the risk of disease spreading between farms. Imports were still required to pass a skin test less than 30 days before import and an additional skin test over 60 days after import was added.

The numbers of herds identified with bovine tuberculosis in the past 14 years (total 13) are detailed in Figure 1. While the number of cattle herds has fallen in that time from about 320 to 270, no more than three herds have been infected in any one year and the level of infection has never reached 1%. 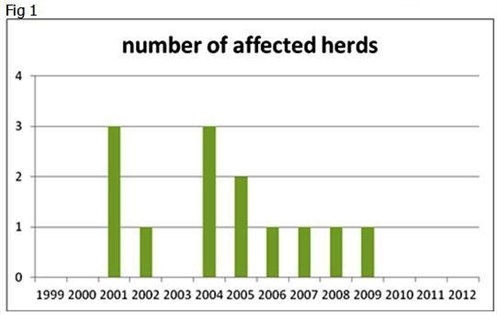 Further research in to disease patterns (epidemiological evidence) demonstrates that 10 of these herds have had unrelated infections – the disease does not spread easily in the island and no farm has ever experienced the return of the infection. All information strongly indicates that bovine tuberculosis is not maintained in wildlife in the island and the measures taken against tuberculosis in cattle are successful – new infections are acquired through imports.

As a result of the continued close co-operation of the farming industry, local veterinary surgeons and the department, no case of bovine tuberculosis has been identified since February 2009.

While a high degree of vigilance will need to be maintained, the department intends to present a case for Official Freedom from the disease to the European Union in the next 12 months. Figure 2 demonstrates the percentage of infected herds calculated in accordance with the relevant EU Directive. A period of six consecutive years at or below 0.1% is required; however, the department can demonstrate that the infections found since 2005 are unrelated and hence are the result of importation. 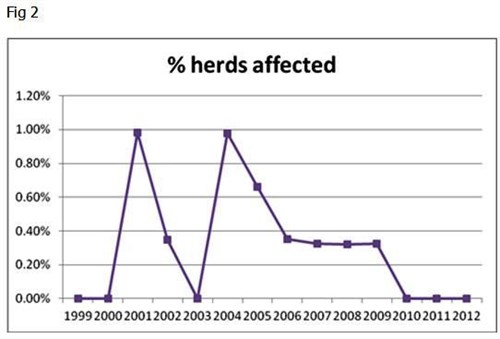 Movement of Cattle during a TB test

Please remember you must not move ANY Bovine animal(s) OFF the holding during the TB test unless they are going direct to slaughter in the IOM, this applies to ineligible cattle as well.