DEFA coordinates the testing of "Fallen Stock"; following the international monitoring requirements for BSE. Animals born after 1/1/1998 and over 48 months of age that die on the farm are tested at the processing plant: brain stem samples are taken and submitted to a UK laboratory.

The results are collated and submitted annually to the World Organisation for Animal Health (OIE) via DEFRA. The OIE reporting year runs from 1 November to 31 October.

Please see below for sampling results over recent years:

BSE was first diagnosed in November 1986 at the Central Veterinary Laboratory, Weybridge. The two cows concerned came from herds in different parts of England, but showed the same abnormal neurological symptoms.

The epidemic reached its peak in 1992. Since then the number of cases has decreased. There are now fewer than 4 suspected clinical BSE cases restricted per week in Great Britain, compared to more than 850 per week in 1992.

The average incubation period of BSE is five years, and only very rarely indeed do animals under three years of age display symptoms. This suggests that cattle in Great Britain first became infected in the early 1980s. 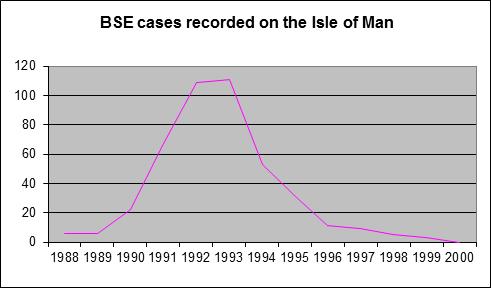 This page will be updated annually.

The Department of Environment, Food and Agriculture is committed to ensuring that its services are accessible to all. If you require this document in an alternative format and / or language please contact us to discuss your needs.