Seven students have been recognised for their ‘outstanding contribution’ to Manx culture by the North American Manx Association (NAMA) at a ceremony in Douglas.

The NAMA’s annual awards honour the achievements of children and young people in areas such as Manx language, music and art.

QEII’s Frank Joughin, 13, was recognised for music due to his exceptional talent on the fiddle and Castle Rushen’s Amelia Leece, 16, and Carrick Sansom, 17, for art. Amelia and Carrick produced a series of paintings inspired by the sea and local landscapes, respectively.

Fiona Pierce, 18 and from QEII and 11-year-old Ted Thompson, from Arbory, shared the Manx language prize. Fiona was recognised after achieving an A* in her Manx GCSE and Ted for showing real enthusiasm for learning, while helping other children in his lessons.

‘The awards recognise the exceptional talents of our young people and their contribution to our unique Manx culture. I have been very inspired by their stories.’

Laurence Skelly MLC, President of Tynwald and Past President of NAMA, also presented awards to Ballakermeen’s Kirsten Karran and QE11’s Cara Leadley after they both made exceptional progress with learning the Manx language in 2021.

‘Recognising our heritage and culture gives a sense of unity and belonging so it is crucial to acknowledge these fantastic young people for their outstanding contribution.’

The winners were all presented with a specially minted silver medal by former Chief Minister Donald Gelling CBE – a life member of NAMA. 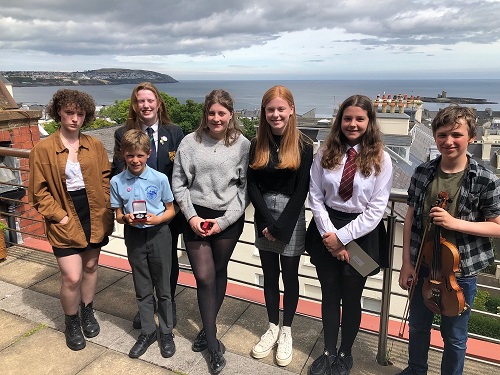