A nine year-old fundraiser who has overcome major health challenges has raised what’s described as a ‘phenomenal’ sum to add comforts for the families of other children who spend time in hospital.

Chloe Rollit from Douglas raised a total of £12,780 for the Children’s Ward at Noble’s Hospital, through a high-profile appeal to the Manx public and Island businesses. Chloe, who suffers from cerebral palsy and a form of epilepsy, has battled her condition and now excels in Paralympic sport. She started her fundraising campaign to inspire other children with disabilities.

At Chloe’s request, £10,000 has been spent on the purchase of 14 new glide-away beds for parents staying overnight in the hospital, half in red and half in blue. The remaining funds will be used to buy new toys and games for the ward and other community outreach areas.

Staff at the hospital have organised a special event this month to mark the donation and celebrate Chloe’s achievement, thanking her family for all their hard work.

‘We are hugely grateful to Chloe for her fantastic efforts to support other children and their families, who like herself have to spend time in hospital. It is an incredibly kind and selfless gesture for her to have raised such a phenomenal sum of money and donated it for the benefit of other children on our Island.’

Chloe won UK recognition when she was chosen to be part of the Superhero Tri in August, one of the main events in the Superhero Series, which offers sports challenges for people with disabilities. The 2019 series was filmed by Channel 4, and Chloe was interviewed by sports presenter Clare Balding when she was chosen to partner Paralympic gold medallists Menna Fitzpatrick and Jen Kehoe in the Tri event.

‘Chloe has fought brave battles to overcome her health issues and her story won her a place in the Superhero Tri. The experience inspired her to help other children reach their potential, and she asked me if we could raise money for children in the hospital. The parents’ beds needed replacing so we’ve been delighted the money raised will be spent on new ones for the comfort of mums and dads staying overnight in the ward.

‘We helped Chloe set up a Just Giving page and sent out more than 100 letters to local businesses asking them to sponsor her. We’re surprised and delighted at the response and the sum raised and we thank everyone who donated. We are so pleased to be able to help the Children’s Ward and know that it will help many parents and carers in the community.’ 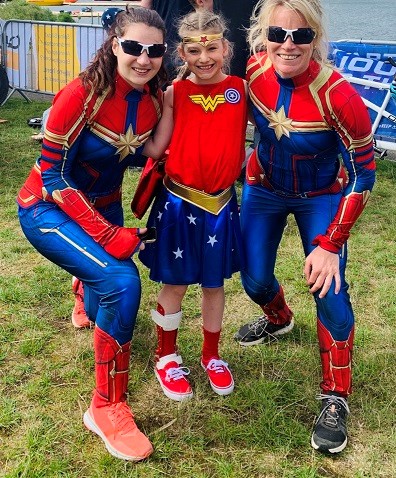