Tree limbing activity is to take place next week at Noble’s Hospital.

The work will be in operation on the grounds of Noble’s Hospital on Tuesday 15 March 2022 between the hours of 7am and 4:30pm, in three different locations (see map below).

This will affect access to the Emergency Department car park (between 7am and 8:30am), but bus and ambulance routes will be possible. Vehicles will need to follow alternative routes, which will be signposted during the relevant periods.

Work on the final area (D) on the map will be carried out on a Saturday during March with some restrictions around the hospital site, as well as buses being re-routed. Further details will be announced once the exact date is confirmed by the contractor.

Drop-off at the hospital by bus will be maintained throughout. 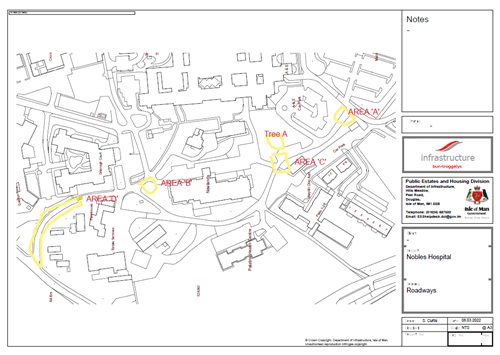