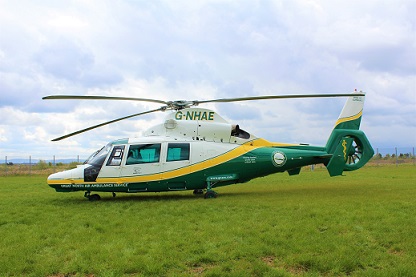 A new service to transfer seriously injured or unwell patients by helicopter from the Isle of Man directly to the UK for emergency medical treatment is commencing long-term trial.

The direct transfer of patients to trauma or other specialist centres in the north-west will ensure those who need it, receive off-Island treatment in the shortest time possible.

The Great North Air Ambulance (GNAA) has entered into an agreement with Manx Care to provide the service for an initial period of seven months. GNAA is an established provider of advanced treatments at the scene of an incident as well as emergency treatment in flight – and its team is experienced in the swift transfer of patients from a variety of locations to the hospital door.

As at present, patients who need immediate hospital care will be brought to Noble’s and if they require further treatment off Island, subsequently transferred by fixed wing air ambulance.

The HEMS is intended for patients who are likely to need immediate specialist care in Liverpool or require specialist skills at the scene, and incoming 999 calls will be screened to identify those most likely to benefit. While the focus will be on trauma cases, it is hoped the new service will in future take patients with certain types of heart attacks quickly to Liverpool.

‘The addition of a helicopter emergency medical service will be a great compliment to existing emergency services and the fixed wing air ambulance provision. Having access to a HEMS service based 25-30 minutes away in Cumbria means emergency services will be able to reach patients fast and intervene as quickly as possible after serious injury or illness, and fly patients direct to definitive specialised care, which will give patients the best chance of survival and longer term outcomes.’

Manx Care’s partnership with GNAA is a step towards delivering on a key recommendation of Sir Jonathan Michael’s landmark review into heath and care services in the Isle of Man: the creation of an enhanced 24/7 emergency air bridge.

'The new HEMS partnership with the Great North Air Ambulance provides another opportunity for the transformation of care in trauma cases and for an increasing range of conditions for Island residents. The addition of a highly trained medical team who can provide life-saving treatments in-flight is an important addition to the Island’s existing service.  I am encouraged by the work taking place to maximise opportunities to deliver better care with the new service.’

The GNAA team be in the Island today (1 September) to meet Noble’s Hospital and Manx Care staff as well as members of the Island’s emergency services and Civil Defence personnel. A simulated HEMS intervention will be staged, to test and demonstrate the capabilities of the service.

The public are reassured the GNAA helicopter is carrying out a simulation only, and the exercise, due to start at 2pm, is expected to last for approximately an hour.