In order to illustrate how a person may receive free legal advice which is funded by Criminal Legal Aid, an example of a fictional person (Mr Green) being charged with an offence is included below.

Mr Green's journey through the Criminal Justice Scheme is broken down step-by-step, beginning with his arrest on suspicion of burglary and ending with him going to prison. In reality, there are other potential outcomes (e.g. the burglary charges could be dropped or Mr Green could be found not guilty). The example below is for illustrative purposes only.

Figure 1. Categories of people & agencies in the Criminal Justice System following Mr Green's arrest as detailed in the example above 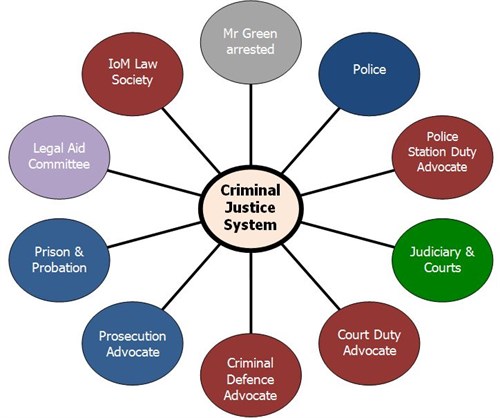