Successful transfer of prisoners to Jurby

The Island's entire prison population was successfully transferred from Victoria Road to the new facility at Jurby on Thursday 14 August 2008.

The unique operation got under way at 6:30am and the last vehicle left the old jail in Douglas at 2:30pm. A total of 90 inmates were transported during the day, with police escorts accompanying the prison shuttles en route to Jurby to ensure there were no road hazards or potential delays.

'This was a large-scale operation that required a substantial amount of strategic and logistical planning. The fact that everything progressed so smoothly is testament to the high degree of planning and the professionalism of the staff involved. This move represents the final phase of one of the Government's largest capital projects and the dawning of a new era in the provision of secure custody in the Isle of Man.'

Two specialist cellular vehicles were brought into the Island by security firm GSL to assist the move and all personnel kept in touch through the TETRA communications system. Prisoners were risk assessed and transp 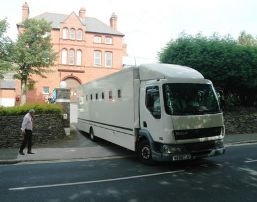 orted accordingly, with stringent searches taking place prior to departure from Victoria Road.

Fifty members of staff were on duty in Douglas - many travelled to Jurby later in the day - and sniffer dogs were also present to prevent illegal substances from being smuggled on to the vehicles. On arrival at Jurby the prisoners were detained in holding cells before passing through airport-style security and a chair designed to detect any secreted items such as mobile phones. Inmates were then escorted to pre-allocated cells to begin their prison lives at the new facility.

'Transferring an entire prison population does not happen anywhere else so we had no established guidelines to work to. We had to put the planning in place ourselves and it has required a huge effort on behalf of the staff, many of whom volunteered to come in on their day off to assist. We house all categories of prisoner in one facility in the Isle of Man which makes this move unique and requires additional planning. It will take time to settle into a new environment, but Jurby prison is a facility the Isle of Man can be proud of. I'd like to pay tribute to the staff and our partner agencies who have played such a significant part in the safe transfer of the prisoners.'

Thirty four local officers were on duty at Jurby and 10 prison officers from Liverpool were brought in to assist on the day. Members of the Independent Monitoring Board were also in attendance. The transfer of prisoners represents the final chapter in the history of the 138-cell prison at Jurby which gained Tynwald approval in 2005 and was officially opened in April 2008.