History of the Prison

The Island’s medieval fortresses also served as the Isle of Man’s first prisons. The crypt at Peel Castle was used as a prison unt

il 1780 when its last inmate, Thomas Kneale, was granted early release. He was considered too weak to serve his full 7 day sentence on account of the severe cold! Prisoners, including debtors, then served their sentence at Castle Rushen.

By the late 18th century Castle Rushen was no longer important as a fortress, Lord’s residence or meeting place for Tynwald but its use as a prison continued. However, after 1765, fines paid in court were no longer used to maintain it and some parts had no roof or floors. Governor Smith (1777 to 1793) protested to the Home Office that prisoners were exposed to the weather and starving from cold and hunger but it wasn’t until 1813 and 1827 that its rundown buildings were converted to make it a secure jail.

Occasionally a death sentence was given and John Kewish, found guilty of murder, was hanged on a scaffold in the Debtors’ Yard in 1872. His body was buried in the stone yard.

Women serving sentences could bring their infants into prison and occasionally babies were born there. Food – milk, bread and beef tea – was provided for babies aged three to nine months where the Medical Officer considered the nursing powers of the mother to be defective.

Unless prisoners were too ill they were expected to work and produce a set amount each day. Goods produced included mats, matting and scrubbers, stone breaking and oakum picking (picking out fibres from old rope so they could be re-used). 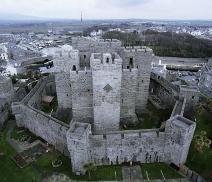 By the 1880s it was obvious that Castle Rushen was not adequate to house in good conditions the number of prisoners in custody. There was no possibility of separating prisoners and it was very hard to keep order. The first inspection by the chairman of the Commissioners for Prisons in England and Wales took place in 1885. His report recommended that a new prison should be built for 30 prisoners and, although some members of Tynwald were against spending money on this, a site was chosen at Victoria Road, Douglas, and the prison was designed by Manx architect James Cowle.

The new prison had an impressive red brick frontage but was built mainly of stone. The Gaoler, Mr Fayle, had his living quarters and offices at the front gate with the main prison block inside the prison yard, surrounded by high walls. On the northern side were three warders’ cottages and gardens. The building was in use from April 1891. 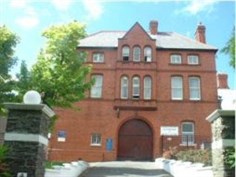 In 1903, HM Inspector of Prisons Major Darnell stated that: ‘The present accommodation consists of 21 cells in the male, and 8 cells in the female prison. The cells are light and airy and well ventilated, and compare quite favourably with those in the best English prisons – boarded floors, clear glass in the windows and external gas boxes. They were uniformly clean and well kept.’

From that time, the prison population rose steadily, along with the Island population. Two new wings, C and D, were opened in July 1989 by the then Minister of Home Affairs, Arnold Callin MHK. C wing initially housed young prisoners (aged 17 to 21) but in later years was used to accommodate adult male prisoners. D wing housed female prisoners.

Even with the additional accommodation, Island authorities were aware by the end of the 20th century that the prison population and modern requirements could no longer be met by the Victoria Road prison.

In July 2005 Tynwald gave the go-ahead for the construction of a new prison to be located at Jurby in the North of the Island to replace the Victorian prison in Douglas. 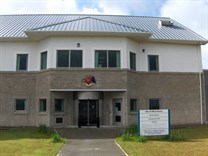 The new prison, which was the Isle of Man Government’s largest capital project between 2005 and 2008, was built at a cost of £41.7million and undertaken by O’Hare and McGovern (IOM) Ltd, which was the main contractor. The mechanical and electrical sub-contract was carried out by a consortium of local contractors named Mannmec.  This was a joint venture comprising of Quiggin and Cubbon Ltd, Easthope and Cubbon Ltd and Arden and Druggan Ltd, which came together specifically for this project.

Following completion of the construction phase and the handover of the buildings from the contractors to the Department of Home Affairs, the prison entered a commissioning and fit-out phase which saw the installation of the security systems and locks.

The new prison became fully operational on Thursday, 14 August 2008 and provided accommodation in single cells equipped with a toilet and washing facilities, much improved rehabilitation, work and training opportunities for prisoners in decent and hygienic conditions.

The old prison at Victoria Road, which first received prisoners in April 1891, shut its doors for the last time after 116 years of constant use, on 14 August 2008. The prison at Victoria road was finally razed to the ground and the site covered with top soil in March 2013.