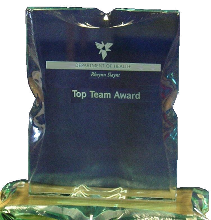 The Department whole heartedly supports the development of our members of staff both personally and professionally. We believe that the achievements of our staff have an immediate positive effect on customer services and so we take great pride in celebrating them.

The Department offers a prestigious award for the efforts of its staff. The award which is known as 'Top Team' has been running for a number of years and has produce some exceptional winners, like the Ambulance Service and their Home Grown Project from 2009/10.

To view recent and other winners please select a year from the hyperlinks below.