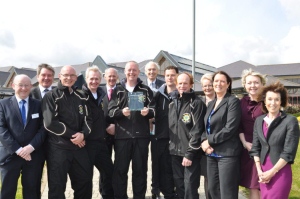 The Hazardous Area Response Team (HART) has triumphed in becoming the Department's Top Team for 2011/2012. HART is specifically designed to maintain patient care in hazardous conditions, such as a cliff fall or aiding a search and rescue mission. This project insures that paramedics are able to attend the site of the accident and assess and treat the casualty as in the past they have only received basic first aid. Before this initiative, paramedics had to wait for the patient to be rescued from the hazardous area before treating them.

Formed by a small group of dedicated paramedics, the Isle of Man's HART has gone through extensive and intense training alongside the Isle of Man's Fire and Rescue Service to ensure that the best proficiencies from all areas are taken advantage of.

'The team was delighted to win the Top Team Award this year, considering the strength of all other entrants. We feel that everyone concerned deserves a big pat on the back for jobs well done. It has been a hard slog for all our team to progress the programme this far. We would like to extend our thanks to all who assisted us, in particular our sponsor, Microgaming Health and Care Trust; the Isle of Man’s Fire and Rescue Service which provided us with such thorough and professional training and the A&E Department which assisted with the reciprocal training initiative. The programme will continue to grow upon our already strong foundations with our focus being to provide patients in hazardous areas with the best standards of care possible.'

'My congratulations go to all the teams that submitted an entry, those who were shortlisted and of course, the team at the Ambulance Service who succeeded in becoming the Department’s Top Team for 2011/2012 with their HART project. The quality of the entrants just goes to show the array of talented teams we have in the Department and I hope that this is an incentive for all teams to put an entry in for next year’s Award.'

'The Top Team Award showcases the Department’s dedication to providing the highest standard of care for the Isle of Man. Every project, initiative or scheme which is devised by the Department has a direct impact on the Manx Public and awards like this recognise the hard work and persistence that teams maintain to provide the Island with the best possible care.'

Four teams were then shortlisted from the pool of entries by 3 esteemed judges; Ann Clayton, Director and Business Consultant; Jan Brooks, President of Breakthrough Breast Cancer Isle of Man, and Helen Summerscales, Managing Director of Isle of Man Advertising and Public Relations. The short listed teams made a short ten minute presentation to showcase why their project should win the title of Top Team. Following the presentation, the judges had the opportunity to question the teams on different aspects of their project followed by the extremely difficult task of deciding the winner.

The runners up of the Top Team Award were:

The Martin Ward Project at Ramsey and District Cottage Hospital

After a generous bequest of £1.1 million this team dedicated time to refurbish Bride Ward and Gardner House at the Hospital into a modern, state of the art, single ward with 9 single en-suite bedrooms.

Launching their services in 2010, the Breastfeeding Peer Support Group offered mothers the chance to get the latest information on the benefits of breastfeeding and provide help to those who are struggling with breastfeeding.

A small, cross-divisional team that consisted of Midwives and Sonographers, ensured the Isle of Man had the same Ante-Natal Screening opportunities as in the UK, enabling the Department of Health to offer more information during a women's pregnancy.