In Manx coastal waters the Government Laboratory routinely monitors, reports on and maintains databases for an established suite of marine water quality variables: temperature, salinity, dissolved oxygen, dissolved inorganic nutrients, chlorophyll, phytoplankton including toxic and nuisance algae. These are natural marine variables that have an intrinsic natural fluctuation and are fundamental to the biological health of the sea.

Following the decision by Liverpool University to close that research station the work is now undertaken by the Government Laboratory, with sampling facilitated by the Department of Environment, Food and Agriculture allowing the use of its vessel, FPV Barrule.

Of particular importance from a fisheries perspective is the phytoplankton monitoring programme which fulfils an obligation to monitor phytoplankton associated with toxin production under Regulation (EC) No 854/2004. The Regulation requires 'Periodic sampling to detect changes of phytoplankton containing toxins and their geographical distribution. Results suggesting an accumulation of toxins in mollusc flesh must be followed by intensive sampling.' This work integrates with the Government Laboratory’s and DEFA Food Safety Unit’s biotoxin monitoring programme.

The data gathered provide not only a statement of the current water quality status of local waters from eutrophication, health and ecological perspectives but also give an insight into environmental change including climate change over the years.

There are particular concerns over the effects of climate variation and change (global warming), pollution and nutrient enrichment of coastal waters. Human activity, for example, increased fertiliser use, effluent discharge or the burning of fossil fuels, have the potential to undesirably perturb natural background levels and modify the environment.

Long time series such as the Isle of Man databases provide a record of the changing state of the Irish Sea around our coasts and can assist when discriminating change forced by human activity from background natural variation. Long-term environmental data provide an empirical overview of environmental change and are essential for effective environmental stewardship and management.

The Isle of Man time series are established and widely respected and are considered important in European coastal waters. They are often the benchmark by which other data are compared. They represent reference conditions for the Isle of Man and also wider Irish Sea waters.

With the assistance of FPV Barrule, DEFA’s fisheries patrol vessel, 5 offshore monitoring sites in the coastal waters of the Isle of Man are serviced, and a further jetty based site is maintained in Port Erin Bay: 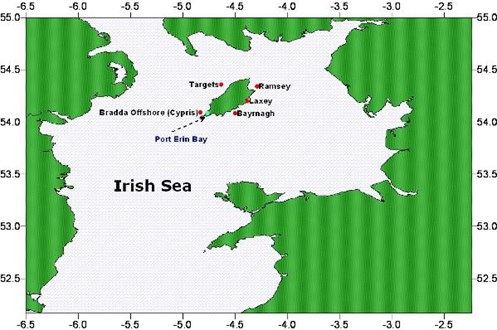 The data collected as part of the Isle of Man marine monitoring program feeds information into several international bodies including the ICES (International Council for the Exploration of the Sea). The ICES Working Group on Phytoplankton and Microbial Ecology (WGPME) issues reports summarising the ecological status of phytoplankton and microbial plankton of the North Atlantic and adjacent seas, incorporating and using the Manx data. The following link takes you to the ICES WGPME page from which the latest report can be accessed: http://wgpme.net/status-report-now

Any specific enquiries regarding the data and should be directed to: