The European Union sets standards for seaside bathing water in the EU area, and although European Law is not applied directly to the Island, Tynwald in 1990 took the decision to adopt the first standards as prescribed in Directive 76/160/EEC. From then until 2020 in order to monitor bathing water quality the Government Laboratory tested seawater from a total of 19 sites around the Island to assess compliance with the that original standard. The sites monitored were not necessarily all bathing beaches in the sense of being beaches where people regularly swim, with facilities to support that activity, but were beaches from which it is known that people do bathe or participate in sports that can involve or result in immersion and possible ingestion of water.

That original standard for bathing water quality had been derived on a rather arbitrary basis, and over time as more information and data became available the World Health Organisation developed new standards based more scientifically on risk. These more up to date standards were implemented by the EU in the 2006 Bathing Water Directive 2006/7/EC, and incorporated into the Isle of Man Water Pollution (Bathing Water Standards and Objectives) Scheme 2021 applying from the 2021 bathing season.

Any discharge or other release of untreated or only partially treated sewage to sea deposits large numbers of micro-organisms into the sea water, which have a significant influence on bathing water quality on beaches. The same is true of untreated water run-off from intensive land-based animal husbandry. These micro-organisms include bacteria and viruses, some of which can be pathogenic with the potential to cause diseases, skin irritations and gastro-enteritis. The most abundant organisms in sewage are, however, the non-pathogenic coliforms, the detection and quantification of which is the basis of the regular testing of bathing waters.

The Isle of Man's sewage system has been undergoing substantial modernisation in recent years, commencing with the major 'IRIS' scheme which has effectively dealt with human sewage from the southern half of the Island since 2005, and continuing with a programme of smaller treatment works in other locations which in due course should ensure that all sewage is adequately treated. Improvements in bathing water quality have been evident in the regular monitoring data as the modernisation has progressed. It is noted, however, that not all of the beaches in the affected areas meet the best standards all the time. This may be because human sewage is not the only source of bacterial contamination, however also possibly relevant is that any incorrect sewage connections to the surface water drainage system will circumvent sewage treatment, which may be of significance particularly in locations with a substantial volume of older property.

Related to this, the quality of bathing water is widely accepted as being affected by weather, with extended periods of sunny, dry weather yielding better water quality than very wet periods, due to the dual effects of ultraviolet light from the sun killing bacteria coupled with less land run-off entering the sea. Therefore summers with good weather tend to have a higher proportion of 'good' scores than bad weather summers.

2020 marked the end of weekly monitoring from 19 sites, with formal adoption of a scheme based on the 2006 EU Directive in which beaches at which the water quality standards of the Directive may be formally designated as bathing beaches, subject to the support of the relevant local authority, which body will be responsible for certain management aspects.

From the 2021 bathing season and onwards regular bathing water monitoring is anticipated to continue only from designated bathing beaches, or from beaches which whilst not designated have been the subject of a declaration of intent by the local authority to seek designation in the near future, or otherwise such beaches as the Department of Environment, Food & Agriculture deems appropriate to monitor for other purposes which may include for public information.

Samples of bathing water continue to collected by, or on behalf of, the Environmental Protection Unit of the Department of Environment, Food & Agriculture, and submitted to the Government Laboratory for testing.

Following the implementation of the new standards, and greater focussing of the sampling activity, the Department of Environment, Food & Agriculture decided to discontinue the 'traffic light' chart system originally set up under the 1976 standards. Instead, the Department's Environmental Protection Unit on a weekly basis for the designated sites publishes graphical data showing weekly water quality. Formal classification of each beach will take place after the end of each bathing season, to become the classification applicable to the following year. More details are given on the Environmental Protection Unit website.

Classification of bathing water quality is based on 20 samples a year collected weekly (except 2020 which due to COVID restrictions was monitored only in the final 8 weeks of the season from the very end of July). The assessment uses data normally from four seasons as described in the 2006 EU bathing water directive.

As improvements have been made to sewage treatment, the quality of bathing water has improved, as demonstrated in the chart below. The top of the combined bars indicates the total number of locations meeting at least the minimum EU standard for any bathing water (classified as "sufficient"), and the top of the green+blue bars indicating the number classified "good" or better. 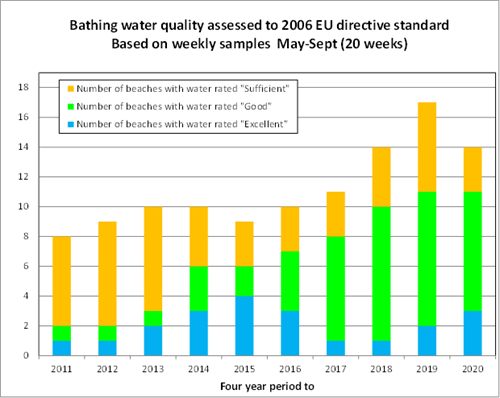