From 30 March 2016 it will be illegal to smoke in vehicles with someone under 16 present.

What does the new law mean for me?
The new law only applies to smoking in private vehicles with someone under 16 present.
From 30 March 2016, both the driver and the smoker can be fined £50 if anyone smokes in the vehicle, with a maximum fine on conviction of £5,000.

What does the law include?

The law includes all cigarettes, cigars and pipes, but it does not include electronic cigarettes or vaporisers.

A person is still considered to be smoking in the vehicle even if they are holding the cigarette out of the window, or leaning out of the vehicle.

The law applies even if doors, windows and sun-roofs are open. However, convertible cars with the roof completely down and stowed, are not included in the new law.

Motorcycles and scooters are not included in the law unless they have covered passenger sidecars, or are two-person mobility scooters with a roof and side covers.

When a motor caravan is being driven on the roads, it is a vehicle and must be smokefree if someone under 16 is present. The law does not apply if caravans or motor caravans are stationary and being used as living accommodation.

The Public Health (Tobacco) Act 2006 was passed by Tynwald and received Royal Assent on 16 October 2006.

Part 2 of the Act provided enabling powers for the Department of Environment, Food and Agriculture to make Regulations to ban smoking in certain wholly enclosed places.

The Government's objectives through delivering smoke-free legislation are to:

As provided for in Part 2 of the Act, the Department of Environment, Food and Agriculture made the No-Smoking Premises Regulations 2007, which received Tynwald approval on 12 July 2007 and came into operation on 30 March 2008.

These Regulations set out specific arrangements for the following aspects of smoke-free legislation:

Substantially enclosed premises: Premises are considered to be substantially enclosed if they have a ceiling or roof, but there are openings in the walls which are less than half of the total area of walls, including other structures that serve the purpose of walls and constitute the perimeter of the premises. When determining the area of an opening, no account can be taken of openings in which doors, windows or other fittings can be opened or shut.

Roof includes any fixed or moveable structure or device which is capable of covering all or part of premises as a roof. This includes retractable canvas awnings.

Premises are required to display a no-smoking sign that meets minimum requirements in, on or near to no-smoking premises, to be displayed in a position that is prominently visible to persons in and approaching the premises.

The minimum requirements are that at least one no smoking sign is to: 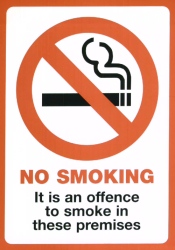 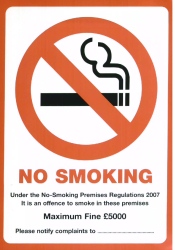 The regulations require the person having the management or control of a smoke-free vehicle to have the same duties to display no-smoking signs that conform with legislative requirements as a person who is concerned with the management of smoke-free premises.

The Government's intention is to create a supportive environment where people are encouraged to comply with the new legislation. We are encouraged by international precedents, where compliance with smoke-free laws has been high. The approach to enforcement will be non-confrontational, focused on raising awareness and understanding to ensure compliance, and enforcement officers will work closely with local businesses to build compliance through education, advice and support. We expect that enforcement action will be considered only when the seriousness of the situation warrants it. Any enforcement action that is taken will be fair, proportional and consistent. Enforcement inspections will be based on risk and, where possible, combined with other regulatory inspections to reduce burdens on business.

The Department has prepared a booklet containing important information for employers, managers and those in control of premises in the Isle of Man, regarding the prohibition of smoking in public premises from 30 March 2008. A copy of this booklet is available to download on this page.