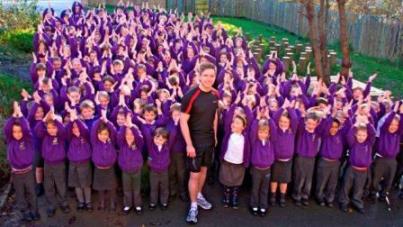 A headteacher is going from running a school to running a marathon to raise money for a local charity.

For Adrian Shorthouse, taking part in the London Marathon in April will realise a long-held ambition and reduce by one his list of things to achieve before he’s 40 in July next year.

However, there’s a much more serious reason behind his bid to raise at least £3,000 for Alzheimer’s Society, something he hopes the whole community will get behind.

‘My mum suffered with Alzheimer’s during the 1990s,’ he said. ‘It is a very cruel and debilitating disease that slowly takes a loved one away, puts their family through a lot of heartache and leaves painful memories.

‘At the time she died, the causes of Alzheimer’s disease were not really understood. Progress has been made but current treatments only offer a small benefit. No treatments have been found to halt the progression of the disease.

‘Alzheimer’s Society does some great things here on the Isle of Man and in the UK to support those who are affected by dementia. The charity also invests in research into finding the causes of the disease and the ongoing search for a cure.’

‘I’m hoping children, colleagues and parents will rally behind me and help me with some exciting fund-raising activities planned in the new year and I’d be grateful for any donations from the public.’

Until now, Adrian has run to keep fit for weekly five-a-side football sessions with friends at the NSC. Now his training schedule involves three or four runs a week around the south of the Island, where he lives, taking in the sights and smells of the sea and farms.

‘I’m currently up to half the distance of a marathon, so there is still a lot of training to be done over the next few months,’ he said. ‘I'm pleased with the pace I am running at. I've just got to maintain it for the other 13 miles.

‘Rob Sellors, Headteacher of Cronk-y-Berry Primary and an accomplished marathon runner, has been supportive and I have been training with him a couple of times. The best advice he has given me though has been in the pub afterwards.’

So what will keep Adrian going as he pounds the pavements through the long winter months?

‘My iPod, loaded with music and audio books to take my mind off the cold, but also the thought of not letting people down, particularly those who are rallying around me and supporting me through sponsorship,’ he said. 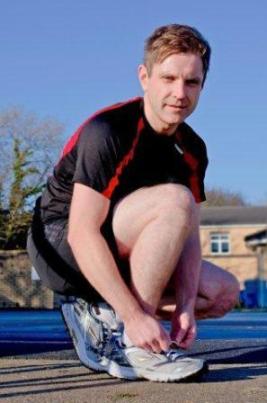 The 2006 Census, set against UK prevalence levels, indicated that an estimated 1,100 Isle of Man residents suffered with dementia. That figure is set to rise again with the publication, early this year, of the findings of the 2011 Census. It is predicted that dementia prevalence will increase by 38% by 2021, by which time as many as 1,532 people in the Island will have dementia.

‘We are extremely grateful to Adrian for choosing Alzheimer’s Society as his chosen charity. As a charity, we rely on the generosity of individuals like Adrian to help us support people to live well with dementia today and fund research to find a cure for tomorrow.

‘We have been working hard with Alzheimer’s Society Isle of Man trustees and the Memory Service to introduce specialised dementia services which will support people living with dementia and carers. As well as a dementia outreach service and peer support groups, we will also have a range of information available from the soon-to-be-established office on the Island.

'Adrian’s donation will go a long way to support these new services and ensure that people affected by dementia get the right help at the right time.’

To donate to Adrian’s marathon effort, visit www.justgiving.com/Adrian-Shorthouse or send a cheque, payable to;