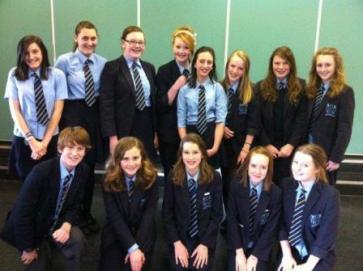 Castle Rushen High School is preparing for curtain up on a spectacular musical production involving dozens of students and staff.

‘The Wiz’ follows Dorothy, who is celebrating Thanksgiving with her family in Kansas. She is caught in a tornado while searching for her dog, Toto, and is transported to the mysterious Land of Oz, where she is informed that the only way to find her way back home is through the assistance of the powerful Wiz in the Emerald City.

As she searches for the Wiz, she befriends others who are facing problems in life just like her. In their quest to find the Wiz, the friends also face Evillene, the equally evil sister of Evermean, the wicked witch Dorothy inadvertently killed when she arrived in Oz.

The musical is a re-telling of the fantasy story The Wonderful Wizard of Oz set in the context of African American culture. The music and lyrics are by Charlie Smalls and the book by William F Brown. The original 1975 Broadway production won seven Tony awards. The film, released three years later, starred Diana Ross and Michael Jackson.

Drama and English teacher Emilie Kermode will direct a cast of 30 students while music teacher Gareth Deakin is the production’s musical director.

‘Gareth and I were both part of productions of The Wiz during our PGCE placements in Manchester and so this musical seemed a natural choice to stage at Castle Rushen. We also relished the prospect of promoting our respective specialist subjects (Drama and Music) within an extra-curricular capacity, especially as the arts is such a valuable area in which students should develop.

‘We sought interest from students and staff, held auditions for lead roles and commenced rehearsals, which have been taking place during lunch times, after school and on the occasional Saturday since September. Since Christmas we have been working tirelessly on combining the drama, vocal and musical elements – no mean feat and a lot of hard work for all the cast and crew.

‘We cannot believe the commitment displayed by our students and colleagues and we would like to take this opportunity to thank them for their energy and support. We hope it’s going to be a fabulous show.’

The challenging music will be provided by the CRHS Wiz Band, which comprises nine students and five staff and is conducted by Senior Education Support Officer Juan Wright. The costumes department is headed by design and technology teachers Lynne Pleavin and Sue Welsh and the lighting and sound crew by student Harry Stewart, 17. Sylvia Jarrett, modern foreign languages and drama, leads the technical team.

Public performances take place on Thursday 9 February and Friday 10 February at 7.30pm and tickets, £5 for adults and £3 for children, are available from the school reception. There will also be a special matinee performance for Castle Rushen’s ‘feeder’ primary schools on Wednesday 8 February.