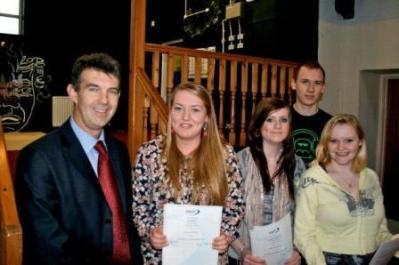 Three teenagers from the north of the Island have a bright future thanks to qualifications gained through the Department of Education and Children’s Youth Service.

They gained in confidence to the point where they wanted to seek a qualification and took a combined course in health and well-being and healthy living via the National Open College Network (NOCN).

Their six months’ hard work paid off when they were awarded the qualifications, achieving a high standard.

Zoe has gone on to gain employment with Crossroads Caring for Carers and Siobhan is furthering her studies at the Isle of Man College of Further and Higher Education, while Alicia is seeking to gain further opportunities via the NOCN at higher levels.

Yesterday Siobhan and Zoe, both 18 and from Andreas, and Alicia, 17, from Ramsey, were presented with their NOCN certificates by Laurence Skelly MHK, a Member of the Department of Economic Development. The presentations took place at an informal celebration at Ramsey Youth Club.

‘This was a remarkable piece of work that involved the girls getting to know each other, gaining in confidence and going on to achieve success and a recognised qualification.’

‘I am delighted to make this presentation to Zoe, Siobhan and Alicia, who richly deserve recognition for their efforts to gain an important qualification. The support and endless encouragement of the youth workers have played an integral part of their achievement and I wish the girls every success for the future and hope they will be an inspiring example for other young people in similar position.’

Among those who have encouraged the girls along is youth worker Cathy Christian, whose work for the Youth Service was recognised with an MBE in the Queen’s New Year Honours List.

Many other figures in the community provide input to the course. One of those who mentored the girls, chef Nuno Correia, of Mama Mia's restuarant in Ramsey, took along a giant cake to the celebration.

The NOCN offers flexible, credit-based qualifications in a wide variety of subjects and the Youth Service is an accredited centre for the organisation.

PHOTO: From left, Laurence Skelly MHK, Zoe Mason, Siobhan Kelly, Shane Garrett and Alicia Brown. At the celebration, Shane was recognised for completing a 12-week course in woodwork and carpentry.