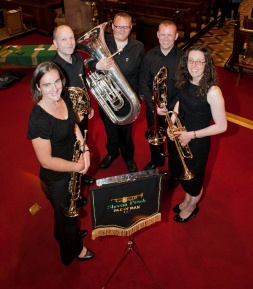 A talented brass quintet is tuning up to take part in a headteacher’s charity fund-raising appeal by playing in Douglas’s shopping centre.

Sheean Prash will perform at The Strand, Douglas, on Saturday 11 February from 2pm and is urging the public to come along and give generously.

‘Music to Watch Shoppers Buy’ will include favourites by Mancini, Gershwin and The Beatles.

Money collected will go towards Adrian Shorthouse’s fund-raising for Alzheimer’s Society Isle of Man. The head of Scoill Vallajeelt is running the London Marathon in April in memory of his mum, who died with Alzheimer’s, and hopes to raise more than £3,000 for the charity, which is expanding its services in the Island this year in response to need. It’s the 39-year-old’s first marathon.

Trombonist Juan Wright formed Sheean Prash – Manx for ‘brass sound’ – in 2004 when he was manager of the Erin Arts Centre. He and trumpeters Helen Quaggin-Molloy and Julie Harrison, French horn player Chris Weeks and tuba player Grant Taylor are among the most experienced brass musicians on the Island.

They have built up a diverse repertoire including popular classics and modern favourites.

In July 2005, Sheean Prash undertook a successful tour of the South of France, performing choral items with a visiting choir and a series of concerts around the Perpignan area. The quintet has assisted a number of local charities, including Age Concern, Manx Landmine Action, Victim Support, Western Live at Home Scheme and, more recently, Crossroads Caring for Carers.

‘We are delighted to be assisting Adrian’s efforts to raise money for such a worthy charity and wish him well in his preparations for the London Marathon in April.

‘We have found The Strand to be an excellent venue in the past and we hope shoppers will give generously this time.’

‘Sheean Prash played in the centre over Christmas and their music immediately transformed the atmosphere into an even more enjoyable experience. Musical performances of this nature are great because there is none of the rigidity of a formal concert and you can stop and listen for as long as you like. Over the years, The Strand has supported many worthwhile charities and none more so than Adrian’s efforts for Alzheimer’s Society Isle of Man.’

To donate to Adrian’s marathon total, visit http://www.justgiving.com/Adrian-Shorthouse or send a cheque, payable to;

For more details about Sheean Prash, visit www.sheeanprash.com or its Facebook page.

Adrian and friends and colleagues will also be collecting money following Douglas Choral Union’s matinee performance of Miss Saigon on Saturday 18 February and outside Shoprite, Ramsey, on Saturday 25 February.