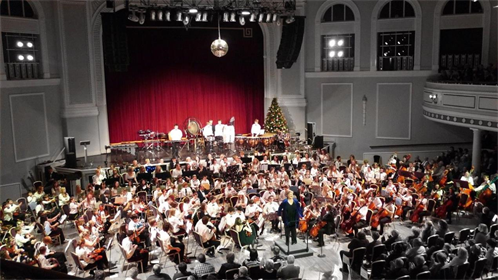 The Manx Youth Orchestra will mark its 50th Christmas performance with a special concert in Douglas on 11 December, including adaptations of songs by Adele, Nirvana and Wham.

Since 1971, the orchestra has given thousands of young musicians the opportunity to play together in a variety of groups and around 150 children will take part in their latest concert.

It will be held at the Villa Marina’s Royal Hall and include performances from several groups including string and jazz orchestras, wind bands and the full Senior Manx Youth Orchestra.

The musical extravaganza, which will get underway at 7.30pm, will see the audience encouraged to sing along to seasonal favourites, carols and modern classics.

'This concert will mark the orchestra’s 50th Christmas and we are looking forward to raising the roof in the Royal Hall yet again.

'Our young musicians have put together a sparkling programme of light classical music, music from stage and screen, traditional carols and pop and rock classics like Nirvana’s Smells Like Teen Spirit and the latest James Bond track by Billie Eilish. We will have something for everyone.'

The concert will be one of a number of events planned over the next 12 months to celebrate the orchestra’s golden anniversary.

'The joy and camaraderie gained through working and performing with other like-minded people has had a positive influence on thousands of young musicians over the last 50 years. I am sure this concert will be one of the highlights of the festive period for those who attend.'

Tickets cost £10 for adults or £5 for children and are available from the Villa Marina or the Welcome Centre and proceeds will be split equally between two local charities Manx Eating Disorder Support and the Friends of the Manx Youth Orchestra.