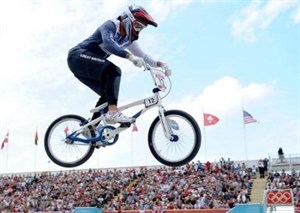 Around 1,200 children are expected to take part in the Isle of Man’s largest multi-sport event next month, as the HSBC Manx Youth Games enters its twentieth year.

Since the Games were first held, more than 20,000 young people have been given the opportunity to learn new skills before putting them into action at the summer event.

Children between the ages of six and 16 would normally have attended weekly training sessions in preparation for the Games on Saturday15 May – but this has not been possible until now due to the Island’s coronavirus restrictions.

Parents and carers must register their child to take part by 7 May – and can select one of the 15 sports that include girls’ football, tennis, and for the first time BMX which will become an Olympic discipline in Tokyo.

‘It is so important for children’s physical and mental health that they get involved in sport, especially after such a challenging year- so I’m really pleased that the Manx Youth Games will go ahead and give young people a great opportunity to be active.’

‘The Manx Youth Games give young people an opportunity to learn, make friends and get active. It also instils the importance of team work and fair play and I am really looking forward to seeing so many children and young people taking part in May.

‘I am confident it will be a memorable day and thank the army of co-ordinators and volunteers, and our sponsors HSBC, who make this special event possible.’

The fully inclusive Games includes a variety of sports for children with special educational needs or physical disabilities including boccia and badminton.

‘HSBC has supported the Manx Youth Games since the event began in 2002 and we are thrilled to see it evolve into an even bigger event for 2021. The Games celebrate the joy children get from playing together, working as a team and trying something new.’

For two decades the Games have proven a catalyst for athletes who have gone on to represent the Island at the highest level including Commonwealth and Olympic Games.