Review of the Functioning of Tynwald 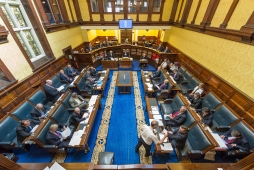 At its sitting in June 2015 Tynwald resolved:

The Isle of Man Government asked Lord Lisvane KCB DL to undertake the Review and to report to Tynwald for its sitting on 19 July 2016.

Lord Lisvane (formerly Sir Robert Rogers KCB) was the Clerk of the House of Commons from 2011 to 2014. His career at the House of Commons included involvement in every aspect of the House's business and administration. As Clerk of the House he was its principal constitutional adviser, and as Chief Executive he was head of the House Service (of some 2,000 people), and Corporate Officer and Accounting Officer. In the course of his career he visited some 50 parliaments world-wide. He is the joint author (with Dr Rhodri Walters) of the standard textbook How Parliament Works, now in its 7th edition.

In 2014 he became a Cross-Bench (independent) Life Peer, and specialises in constitutional and legal issues. He is a member of the Lords Select Committee on Delegated Powers and Regulatory Reform, and of the Ecclesiastical Committee.

Michelle Norman, a Manx advocate in the Attorney General’s Chambers, was appointed as the Secretary to the Review.

In conducting the Review, Lord Lisvane was asked to:

The proceedings of the Review were held in public, as required by section 4 of the Inquiries (Evidence) Act 2003, at the Legislative Council Chamber, Legislative Buildings, Finch Road, Douglas during the weeks beginning Monday 16 and Tuesday 30 May 2016.

The sittings were live streamed via the Tynwald website and were recorded by the Tynwald Hansard team.  The transcript prepared by that team of the oral evidence is one of the documents which can be downloaded from the list of downloadable documents on the right hand side of this page.  The selection of witnesses to give oral evidence was at Lord Lisvane's discretion, but written submissions were invited from the general public.  The written evidence received is available for downloading as in the list.

Following the conclusion of the sittings, Lord Lisvane prepared his report, which has now been published as GD 2016/0047 and is included in the list of downloadable documents.

[For ease of reference: the recommendations are set out in the Explanatory Memorandum to Tynwald Members.]

The Tynwald debate was deferred via a Ministerial Statement by the Minister for Policy and Reform at the March 2017 sitting of Tynwald, to the June 2017 sitting.

The Hansard of the debate and decision during the Tynwald sitting in June 2017 is available to view - Tynwald Hansard June 2017 Item 5.

The cost of the Review has been published and is included in the list of downloadable documents.