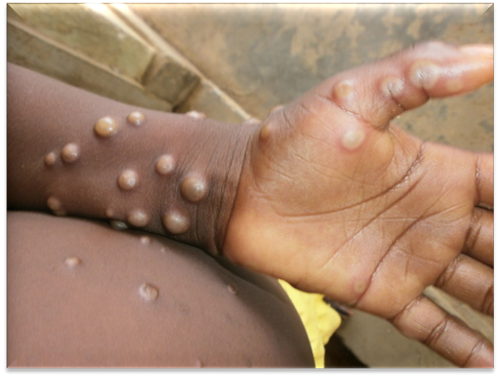 Monkeypox is a viral infection usually associated with travel to West Africa, spread by very close contact with someone with monkeypox. It is usually a mild ‘self-limiting’ illness – meaning it most cases it resolves itself without treatment, with most people recovering within a few weeks. The main symptoms are:

A rising number of monkeypox cases in the UK is prompting a warning to people in the Isle of Man.

While no cases have been reported on the Island, and the risk remains low to the general public, people are being asked to be aware of the symptoms.

Be alert to any unusual rashes or lesions on any part of your body, especially genitalia.

Those who may be at higher risk include anyone who changes sexual partners regularly, or has close contact with individuals that they don't know. It’s important to stress that this is not an illness that affects one community more than any other and it’s not a sexually transmitted disease. It is spread by close contact with an infected person or through touching clothing, bedding or towels used by someone with the monkeypox rash.

If you think you have monkeypox symptoms – however mild:

If you are travelling off Island, visit the Travel Health Pro website for information and advice.

What details can you confirm about these latest cases?

View details of all confirmed cases

Are these the first ever confirmed monkeypox cases with no travel history?

In 2018, a case of the monkeypox virus was transmitted from a patient to a healthcare worker in the UK. In May and June 2021, 3 monkeypox cases were reported from within the same family; the index case had recent travel history to Nigeria.

Monkeypox can spread if there is close contact between people but the risk of spread of monkeypox to the UK population remains very low.

How can you catch monkeypox?

Monkeypox can be caught from infected wild animals in parts of west and central Africa. It's thought to be spread by rodents, such as rats, mice and squirrels.

You can catch monkeypox from an infected animal if you're bitten or you touch its blood, body fluids, spots, blisters or scabs.

It may also be possible to catch monkeypox by eating meat from an infected animal that has not been cooked thoroughly, or by touching other products from infected animals (such as animal skin or fur).

Monkeypox can spread if there is close contact between people through:

What happens when you become infected?

If you get infected with monkeypox, it usually takes between 5 and 21 days for the first symptoms to appear.

The first symptoms of monkeypox include:

A rash usually appears 1 to 5 days after the first symptoms. The rash often begins on the face, then spreads to other parts of the body.

The rash is sometimes confused with chickenpox. It starts as raised spots, which turn into small blisters filled with fluid. These blisters eventually form scabs which later fall off.

The symptoms usually clear up in 2 to 4 weeks.

What is the incubation period (the time period between exposure to an infection and the appearance of the first symptoms) of monkeypox?

How is monkeypox spread?

Monkeypox can spread if there is close contact between people

Spread of monkeypox may occur when a person comes into contact with an animal, human, or materials contaminated with the virus. The virus enters the body through broken skin (even if not visible), respiratory tract, or the mucous membranes (eyes, nose, or mouth).

Person-to-person spread is very uncommon, but may occur through:

Is monkeypox spread by sex?

Treatment for monkeypox is mainly supportive, but newer antivirals may be used.  The illness is usually mild and most of those infected will recover within a few weeks without treatment. High quality medical and nursing supportive care will be provided to individuals to manage symptoms.

What is the death rate for monkeypox?

The disease caused by monkeypox is usually mild and most of those infected will recover within a few weeks without treatment. However, severe illness can occur in some individuals and those with underlying conditions such as severe immunosuppression.

There are different strains of monkeypox virus in different parts of Africa. The cases confirmed recently in England have been a strain found in West Africa, which is known to be associated with less severe disease. No fatal cases occurred in an outbreak of monkeypox in the USA in 2003 which came from West Africa.

How concerned are you about this? Is the risk to the public really low?

This is a rare and unusual situation. UKHSA is rapidly investigating the source of these infections because the evidence suggests that there may be transmission of the monkeypox virus in the community, spread by close contact. Monkeypox remains very rare in the UK and Isle of Man and the risk to the general public remains low. Public Health Isle of Man and Manx Care have well established and robust infection control procedures for dealing with cases of imported infectious disease and these will be strictly followed.

What are you doing to inform people of the risks of this disease now it appears to be spreading more widely?

We are urging anyone who changes sexual partners regularly, or has close contact with individuals that they don't know, to be aware of any unusual rashes or lesions and contact the GUM sexual health clinic without delay. If there are any local cases, we will be contacting potential close contacts of the cases to provide health information and advice.

Public Health Isle of Man and Manx Care have well established and robust infection control procedures for dealing with cases of imported infectious disease and these will be strictly followed.

Do condoms prevent you catching or passing on monkeypox?

We always encourage use of condoms to prevent STIs. Monkeypox is not a sexually transmitted infection by nature, though it can be passed on by direct contact during sex. Contagious lesions, through which infections are most likely to be passed on, can appear on any part of the body so condoms will not necessarily prevent transmission of the virus between two people who are in direct contact. The infection can also be passed on through contact with clothing or linens used by an infected person.

Can Monkeypox cases be asymptomatic and if this is possible, can they still spread the virus?

Previous asymptomatic infection has been in those with low-level exposure to infected animals in Africa. Person to person transmission of monkeypox is rare and there is no animal reservoir of infection in the UK for this to occur.

Are you recommending extra PPE/ infection control procedures in health settings in response?

As monkeypox is a high consequence infectious disease (HCID), appropriate PPE should be worn by clinicians undertaking clinical assessment of potential cases.