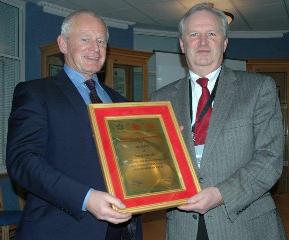 The Isle of Man Government has been thanked for its long-standing support towards the development of educational facilities in Nepal.

Chief Minister Allan Bell MHK recently received a commemorative plaque to celebrate the completion of the 25th Manx-funded school project in the country. It was presented by Howard Green MBE on behalf of Mahashram Sharma, Director General at the Nepali Department of Education.

‘The Government of Nepal wanted to express their sincere thanks to the generous people of the Isle of Man for providing modern facilities where children can now work in a safe and secure learning environment.’

Through financial assistance from the Council of Ministers Overseas Aid Committee and donations by Island residents, the Trust has helped to build and equip schools in many remote Nepali villages. It is hoped that a further three Isle of Man-funded schools will be completed during 2012.

‘The Isle of Man has a reputation as a responsible and caring nation and we take our commitment to supporting overseas projects very seriously indeed. It is encouraging to hear how assistance provided by the Island has played a part in helping to improve the lives of Nepali schoolchildren, and I would personally like to thank Howard for all his hard work over many years.’